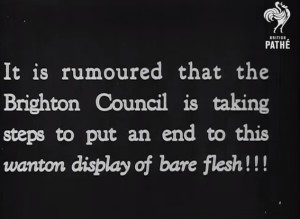 The proposed ban on smoking on Brighton beach has created a flurry of headlines – but this is not the first time the council has moved to ban a popular pastime from the city’s shores.

This Pathe video, shot in 1898, features young women showing off the latest bathing fashions before skipping down the shingle to dip their toes in the waves.

But although the swimming costumes look demure to our modern eyes, the newsreel informs us that “it is rumoured that the Brighton Council is taking steps to put an end to this wanton display of bare flesh!!!”

However, the authorities clearly became more liberal in later years, as in 1980 the first naturist beach opened in Brighton, and the Cliff Bathing Beach between the Palace Pier and the marina is still going strong.