The object destroyed in a controlled explosion by bomb disposal experts before Brighton Pride was a pinhole camera, Sussex Police said this afternoon (Thursday 6 August).

The parade was delayed and rerouted as a result.

The force said: “Police have confirmed that a suspicious looking item found on Brighton seafront just minutes before the Pride parade was due to set off was a pinhole camera. 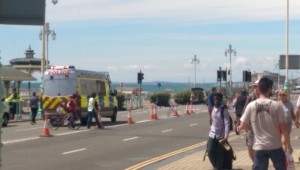 “Detectives have determined that the item was not placed there deliberately to disrupt the Pride parade and are linking it with two similar items, which were found in Brighton Marina multi-storey car park in July this year and near St Peter’s Church near The Level in August 2013.

“The items were empty drinks cans with a piece of photographic card or paper inside, covered in black duct tape and taped to railings or road signs.

“This is known as a pinhole camera, which are used to take photos of objects or landscapes over an extended period of time.”

“No offences have been committed on this occasion as there was no deliberate intent to disrupt or cause harm and we do not believe that the person responsible considered the implications of placing that item at that location.

“It is reassuring to know that there was no intention of targeting Pride or any particular community.

“However, if it important that permission is given and recorded if such items are to be placed on public or on another person’s property.

“Failure to do this may mean that an individual does commit an offence of public nuisance or criminal damage.

“The item on Saturday did look like a suspicious device and we were concerned enough to call in the bomb disposal unit who, after making a further assessment, also agreed it was highly suspicious and carried out a controlled explosion.

“The area had been cordoned off and there was no risk to the public.”