A Brighton bus driver was left shaken after a passenger spat in his face because he would not let him off the bus before it got to the next stop. 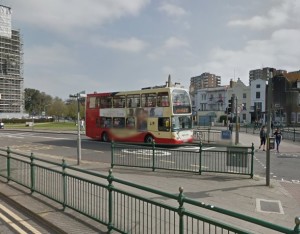 CCTV is to be handed to police so they can try and track down the attacker after the incident on the 5A bus in Gloucester Place yesterday morning.

The attack was witnessed by former council leader Bill Randall, who was waiting for the bus at St Peter’s Church when the thug pushed past him.

He said: “A bullet-headed little runt in his 50s and wearing a high-vis jacket pushed through and said ‘Let’s get on this bloody bus.’

“Almost as soon as he got on he realised he was on the wrong bus and demanded that the driver stop and let him off.

“The driver said, quite rightly, he would have to wait for the next stop. The bus then stopped at the traffic lights, the bullet-headed little runt demanded to be let off and tried to open the doors using the emergency button. The driver resignedly opened the door. As the bullet-headed runt got off he turned and spat in the driver’s face before running off.

“We all got off the bus at the next stop at the bottom of North Road. The driver, not surprisingly, was shaken up and also needed to clean his face using a medical swab kit. The bus was parked on the junction, the two 25s behind it couldn’t get round it and all the buses coming from the London Road backed up.

“In his actions, the man had assaulted the the bus driver, disrupted the bus service and the morning of a great many people travelling into the city.

“His actions are captured on CCTV, and one of the passengers took a snap of him. I hope he’s tracked down and prosecuted. In a similar case, I understand, a prosecution was successful using DNA evidence.”

Brighton and Hove Buses managing director Martin Harris said the company had reported it to police and was getting hold of CCTV to help their investigation.

He said: “We can confirm that we are following this up with Sussex Police who we always work closely on with regard to assaults on our staff.

“CCTV evidence is being obtained and we will support our employee fully in pursuing action against the assailant. This behaviour cannot be be tolerated.”

A police spokesman said: “Police were called at around 12.45pm on Wednesday to a report a bus driver had been spat on in Brighton.
“The victim left the St Peters Church bus stop at around 11.15am that morning when the suspect asked to be let off the bus.
“The victim refused as it was not safe, but the passenger pulled the emergency handle to open the doors. The suspect then spat at the driver before running off.
“Police enquiries are continuing.”