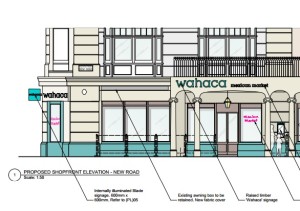 A planning application has just been submitted to change the signage on the unit on the corner of New Road and North Street.

As well as new Wahaca signs, permission is sought to turn the North Street entrance into a window, put coloured glass in the colonnade lanterns and replace the olive green external paintwork with a bright turquoise blue,

The application, written by Kate Matthews of Firstplan, says: “Wahaca is proposing a scheme very similar to that currently presented on the building however in the new tenants commercial branding. This is an attempt to ensure a scheme of advertising that is considered acceptable in light of the buildings historic value and will therefore preserve the character of the premises.

“As such, the proposals have been designed carefully to ensure that the materials, colour and style of the advertisements are appropriate for the Grade II listed building and wider conservation area.”

The first Wahaca was opened by Masterchef winner Thomasina Miers in 2007 and prides itself on having shaked up Mexican cooking in the UK, moving from greasy guacamole, tacos and tequila shots to fresh street food.

Since then, Mexican street food restaurants such as La Choza and Carlito Burrito have also opened in Brighton.

Meanwhile, Wahaca has expanded and now has 20 branches throughout London and in Liverpool, Manchester, Bristol and Cardiff, as well as three London bars.

Also on the planning list this week is an application to open another upmarket chain, with a change of the signage at the Mo Brog shoe shop to turn it into a new branch of the Cambridge Satchel Company.

The company and its founder Julie Deane are perhaps best known for starring in a Google TV advert in 2012, which documented the rise of Ms Deane’s satchel empire from her kitchen table in 2008 to global fashion fame by reaching out to style bloggers, who then took them to fashion shows.

In 2013, it opened its first store in Covent Garden, and now has three in the capital and one each in Glasgow and Cambridge.