Roads through Brighton and Hove were brought to a halt tonight as hundreds of demonstrators marched in protest at plans to bomb Syria. 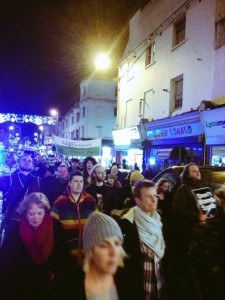 The protest, organised just 24 hours beforehand, assembled at the war memorial on the Old Steine at 5.30pm, on the eve of a vote in the House of Commons that could lead to Britain taking part in air strikes on Syria.

About 200 demonstrators  then made their way up North Street and along Western Road before stopping at Hove MP Peter Kyle’s office in Church Road.

Protesters were angry that the Labour MP has indicated he may support air strikes against ISIS in Syria if he is satisfied preparations for an adequate humanitarian response have been made. 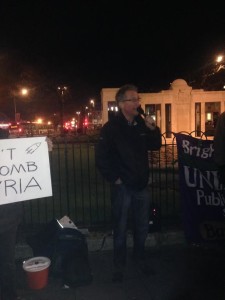 Brighton activist Dani Ahrens and local Labour Party member Greg Hadfield were among the speakers. Mr Hadfield referred to MPs expressing their support for air strikes earlier when he tweeted: “I wish MPs would say what they mean: ‘I support killing Syrian men, women, and children.’”

The Prime Minister David Cameron is asking MPs to vote in favour of joining America and France in bombing Syria. The RAF is already bombing in Iraq.

Not quite thousands, but probably about a hundred at tonight’s Stop The War demo – no traffic delays though pic.twitter.com/2lo7C51TZ9

Hove Labour MP Peter Kyle is likely to vote with the Conservative government and against his party leader Jeremy Corbyn.

On Sunday, when it was still unclear whether Mr Corbyn would impose a whip on his party for the vote, Mr Kyle told the BBC: “We know full well that non-intervention is going to provoke a reaction in the Middle East in the same way an intervention is and we have to weigh up the pros and cons of that in a very, very difficult climate.

“So I am almost at the point of committing to support the Government but I still have a couple of key questions to do with the humanitarian response I need unequivocal answers to before I will fully offer it.

“My thinking is now so advanced, the conversation I’ve been having with my constituents is very advanced … that to be honest the whip is irrelevant to me now.”

A fuller account of his thoughts on the issue which he posted on his Facebook page on Friday has attracted hundreds of comments, most vehemently opposed to bombing Syria. Tonight, he said on Twitter that he was still due to meet with Government ministers and then would reflect more.

Simon Kirby, the Conservative MP for Brighton Kemptown, is expected to vote with his party’s leadership.

As a whip he is a member of the government and classed as part of the “payroll vote”. As such, he is expected to exercise collective responsibility, which requires him to speak and vote with the government regardless of his personal views.

If he voted against the government he would almost certainly have to resign. 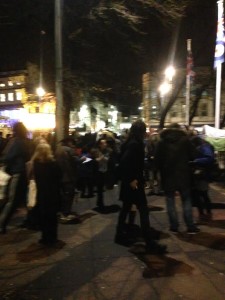