Hove residents gathered in force tonight (Monday 7 December) to express concern about a proposal to build a 17-storey tower containing 107 flats on the corner of Sackville Gardens and Kingsway.

Angelique Henderson, chair of the No To Sackville Tower campaign group, said: “We have only known about the plans for a couple of weeks and already more than 300 people have joined our campaign on Facebook.

“It’s not just residents of Sackville Gardens who are opposed to the tower – people from across Brighton and Hove have told us how worried they are. 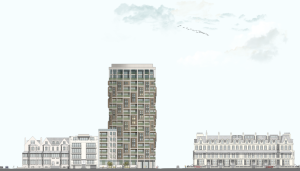 “The council’s own planning guidance on tall buildings is based on a detailed independent study which categorically excludes Sackville Gardens conservation area as a zone appropriate for a high rise.

“We ask that whatever is proposed is of high architectural quality to enhance the area.

“The No To Sackville Tower committee would be fully behind a proposal of suitable height and design by an architectural firm with a track record in producing award-winning buildings.

“Other, much more modest designs, have been rejected on the grounds that they are too bulky or do not improve the area.

“It is difficult to imagine how this giant cylinder – which will loom over us and stick out like a sore thumb – could ever be approved by the council’s planning committee.” 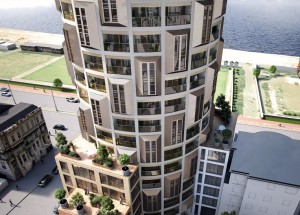 Hove Labour MP Peter Kyle backs the residents’ campaign and said he feared that the apartments would be too expensive and that the flats would be bought mainly by property speculators from abroad which would price yet more local residents out of the market.

Westbourne ward councillors Denise Cobb and Tom Bewick also feel the proposed tower is out of keeping with the neighbourhood.

Mrs Henderson and Valerie Paynter from Save Hove have started a petition which they hope to take to Brighton and Hove City Council when the full council meets on Thursday 17 December. They are petitioning for a planning brief – the rules of engagement for a particular site.

There is broad agreement that the site needs to be developed but residents want to limit the height of any new-build which they maintain should be no higher than the existing buildings. 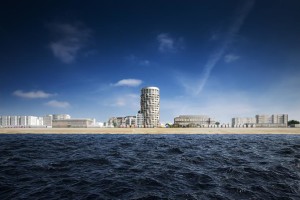 After the meeting Hyde said that the architects, Yelo, a Brighton firm, had won awards for its previous project with Hyde, the recently completed One Hove Park. Hyde was also pleased with the quality of the design for its seafront proposals.

These would provide much-needed homes at a time when the government was putting pressure on the council to meet a challenging housing target.

Hyde said that the seafront scheme was part of a mix of developments which, as a whole, were doing more to tackle housing need locally at every level than anyone else.