A Sussex Police inspector is facing a disciplinary hearing on Monday accused of a catalogue of breaches of police protocol, including leaking a series of stories to The Argus’s former crime reporter. 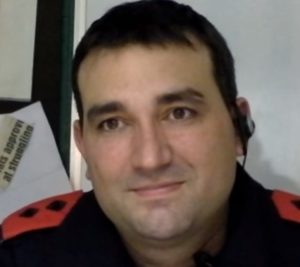 Inspector Lee Lyons is also alleged to have phoned prostitutes while on duty, put details of operations on Facebook, emailed police documents home, and been rude to colleagues during an operation in Wales, including throwing a paper plate at a woman working in the canteen.

The hearing will be told that he formed relationships with two reporters, one of whom the News understands to be Anna Roberts, who joined the Argus in August 2010, and was later promoted to crime reporter, a post she held until she left in May 2014.

Lee Lyons is accused of leaking several stories to her from November 2011 onwards, including details of the robbery of a Newhaven taxi driver, an assault in Lewes and a teenager who died suddenly in the street in Bexhill.

The first text exchange detailed in the charges happened on 20 November, 2011: “you had a conversation by text with her in which she told you she had just been chastised by the (Sussex Police) Press Office for not following procedure and failing to reveal her source regarding an exclusive report by her.

“You texted, ‘Ask them about the taxi driver robbery in Newhaven instead!’ You added, ‘Not heard from me, of course.’

“You then disclosed details of the incident stating, ‘…About 2ish maybe. Four suspects used knife assaulted driver and had £100 away.’

The story appeared on the Argus website the following day under Ms Robert’s byline.

He is also alleged to have leaked a string of stories about policing in Battle and Hastings, where he was based, to a second local reporter, including crimes and details of force restructures.

And he is also charged with sending details of police operations to BBC producers, including the operational order for the Pride event in Brighton.

The journalism industry news website Press Gazette has questioned how Sussex Police obtained details of the text message exchanges, in the light of other forces using powers to seize journalists’ mobile phone records to investigate leaks.

It says: “Over the last four years at least 82 journalists have had their call records viewed by police forces in order to find their sources. This is the first time a police force has published details of the content of a journalist’s text messages, to Press Gazette’s knowledge.”

However, police denied that journalists’ phone records had been seized as part of the enquiry. A spokesman said: “Sussex Police became aware of contact with journalists as a result of examination of devices owned by Sussex Police and analysis of Lee Lyons’s personal devices, which were obtained with the necessary legal permissions.

“The investigation has not required or involved any access to records of any other parties.”

Inspector Lyons’ hearing will take place at 2.30pm on Monday at the Sussex Police headquarters in Lewes. This will be the force’s first such hearing to be held in public.

Insp Lyons was suspended from his post last year following an investigation into leaks to the media. He is now hoping to set up a bookshop in a former lingerie store in Battle and has launched a Crowdfunder campaign to raise the necessary funds.