A light dusting of snow in Brighton and Hove has brought a visible reminder of the wintry temperatures outdoors today (Sunday 17 January).

With light showers forecast and a strengthening easterly wind, more snow or sleet could fall although slush seems more likely than a layer of snow on the ground.

As some drivers found over the past week, the roads can be icy and the emergency services have issued various warnings. 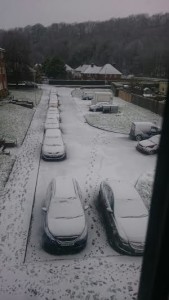 Until earlier this morning the Met Office had a severe weather warning in place for the south east, including Brighton and Hove, about the prospect of snow and ice.

It said: “While not everywhere will have lying snow, local accumulations of 2cm to 4cm are likely at low levels.

“Ice is likely to prove an additional hazard in places. Please be aware of the potential for some travel disruption and difficult driving conditions.

“A frontal zone which moved eastwards into Britain on Saturday has stalled against the cold air mass which became established over the UK earlier in the week.

“This has allowed rain at the leading edge of this frontal zone to turn to snow and persist for several hours before the frontal zone weakens during Sunday, allowing less cold conditions to start developing and some of the snow to start melting.

“This snow is expected to continue to fall along a relatively narrow corridor, perhaps only 100 miles wide, which means that some areas within the warning area may escape much of the snow.

“Meanwhile, icy stretches are likely to develop on untreated surfaces, including footpaths and cycleways, as snow starts to peter out later on Saturday evening or during Saturday night.”

By the end of the week the temperature should be notably less chilly but the rain will return, with a downpour forecast for Friday morning (22 January).