Planners tell Astoria cinema developer: ‘Come back with something better’

Grand plans to demolish Brighton’s art deco Astoria cinema and replace it with managed housing for young professionals have been turned down because the flats were too dim and noisy. 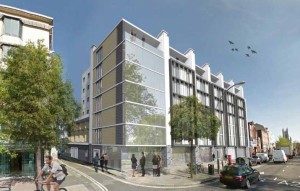 An artist’s impression of Threesixty’s plans

Student housing developers Threesixty wants to build a six-storey block of flats which will act in a similar way to student schemes, with shared kitchens and living areas, but with luxury facilities such as a gym and cinema, and aimed at working people who can’t afford the city’s high rents for standard flats.

But Brighton and Hove City Council’s planning committee refused the plans yesterday because many of the 70 flats were substandard as they only had windows on one side of the building.

However, Threesixty was invited to come back with new plans which addressed the committee’s concerns.

Simon Bareham from Lewis Planning speaking for Threesixty told councillors: “This is not a standard student housing scheme, it is a specialist, high amenity development. It has support of the heritage team, English Heritage and meets 10% of the city’s housing need.

“We believe there is a demand for the private rented sector, we do not see this as student accommodation.”

In support of the need for private rented accommodation, Cllr Adrian Morris said: “Rents are unbelievably high in the area for young families.”

Cllr Leslie Hamilton added: “We have to bite the bullet at some time, this plan does not meet the criteria but we do need to find brownfield sites and greenfield sites. We need to build more housing.”

The planning officer recommended refusing the development because it offered substandard accommodation with insufficient access to natural light, an unduly enclosed outlook, potential noise from the inner courtyard and lack of privacy for residents.

Several councillors, including Councillor Maggie Barradell, agreed that the development was confused, combining residential and commercial units with an inside garden courtyard, and questioned the design.

Councillor Carol Theobald criticised the plan because there was no parking in it, saying the underground courtyard could have cars in it.

This challenge was given by Councillor Phelim MacCafferty: “I am confused, I agree with Cllr Barradell, I am in favour of the desperate need for housing but I am not convinced by this development. I am confused by what the different elements together here are. Come back with something clearer for us and we might be able to embrace that conversation and get something better.”

Chair of the council’s planning committee Councillor Julie Cattell summed up the debate: “If this is the choice, it is a poor choice. Windows that only look one way, that is contrived.”

The committee voted by nine to two to refuse the application, in line with the planning officer’s recommendation.

The grade II listed Astoria in Blenheim Place was a cinema from 1933 to 1977 and then a bingo hall until 1996/7. There is already listed building consent in place for its demolition, but this will not happen until an approved scheme is ready to commence.

Separately, councillors also refused an application by Aldi on London Road to extend the opening hours of the store. These hours were specific conditions agreed when Aldi opened.