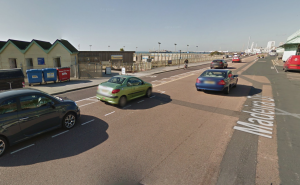 The mugger tried to snatch a bag belonging to a 19-year-old man near the Peter Pan’s Playground site late in the afternoon on Tuesday 26 January.

Sussex Police said: “Police in Brighton are seeking witnesses to an attempted robbery on the seafront in which the victim resisted an attempt to snatch his bag.

“The incident happened shortly before 5.30pm on Tuesday 26 January as a 19-year-old man was walking west along the lower esplanade near the Peter Pan children’s play area.

“The offender approached and asked for a cigarette but was refused. The victim began walking up steps to the A259 Marine Parade. As he did so, the offender tried to grab a bag he was carrying.

“A struggle ensued before the victim broke free to run up the stairs. His assailant ran off in an easterly direction.

“The offender is described as a white man, about 6ft, twenties to thirties, slim, with short dark hair combed to the right. He had black stubble on his face and brown eyes.

“He may have had a northern accent and was wearing blue jeans, sandy brown boots and a black coat.”

Anyone who saw what happened or who has other information about the attempted robbery is asked to phone Sussex Police on 101, email 101@sussex.pnn.police.uk or call the independent charity Crimestoppers anonymously on 0800 555111.