More people are sleeping rough in Brighton and Hove than almost anywhere else in the UK, with the headcount in the city almost doubling since the previous year. 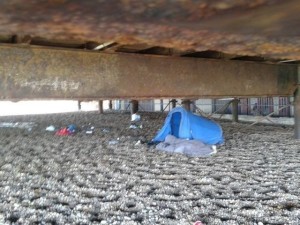 The 92% rise to 78 in the autumn 2015 rough sleeper count from 41 people in 2014 is three times the national rise of 30%, and means only Bristol and Westminster have higher numbers. The city also has the tenth highest rate per population in the country.

The sharp rise followed a summer in which local agencies said they hadn’t seen the usual seasonal peak, with numbers down on the previous year – but that there had been a rise in rough sleepers who simply couldn’t afford their rent.

The stats, released by the Government today, come as Brighton and Hove City Council consults on a new draft rough sleeping strategy, which aims to get agencies working more closely to promote: “the same consistent message and a single offer of support focussed on helping people move away from rough sleeping and street life.”

It also includes plans for a new assessment centre and a new hostel for older homeless people with complex needs built with a £569,000 government grant, which should in turn free up general hostel space.

Clare Moonan, the city’s lead councillor for rough sleeping, said: “The issue of people sleeping rough has become more acute with a visibly increased presence on the streets.

“Most importantly, this has a negative impact on the individual’s life chances. The street is a very vulnerable place to be.

“Homelessness and rough sleeping could happen to many of us with little warning, from the loss of a job or a relationship breakdown for example. These difficult times can be compounded if people have other needs such as mental health, addiction and other vulnerabilities.

“The city’s current approach to rough sleeping is being re-assessed in partnership with all groups and organisation providing services, the wider community and with commissioners.

“We have used the thoughts and ideas of many partners shared at our Rough Sleeping Summit in December and earlier consultation. We have also looked at research carried out with those who are sleeping rough, or have previously slept rough, to develop this draft strategic plan.

“We need to make sure we combine our efforts with a joint sense or energy and purpose to focus on supporting people to move forward with their lives, regain their health and find secure housing.

“I hope that all the partners across the city working with people sleeping rough will endorse the final Rough Sleeping Strategy which is expected in the summer.”

The count was carried out in November 2015 on a single night across the city. Since then, at least three homeless people have died on the streets.

A report by Brighton Housing Trust, which runs the First Base Day Centre for rough sleepers and a range of other services for homeless people in Brighton, Eastbourne and Hastings, found that in 2014/15, almost one in three single people accessing their services were homeless because they had been kicked out by friends or family for some reason.

Another 19% were homeless due to the breakdown of a relationship, 17% evicted from a hostel and 13% evicted by a private landlord.