Pavement cyclists are unlikely to be fined unless they are riding dangerously after the rules were changed by the Government to discourage fines being handed out. 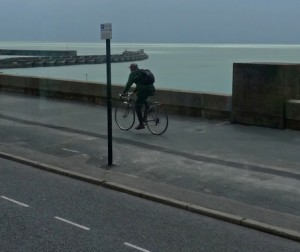 Whereas police used to be able to hand out fines on the spot, officers now have to fill out a form and send it off to the ticketing office to decide whether a fine or warning is more appropriate.

As a result, pavement cyclists are now more likely to be stopped and warned about the possible dangers. If there is a particular problem in a specific area, a day of action can be considered – but no areas currently qualify for this.

The change of heart came to light at a recent meeting of the London Road Local Action Team, which was sent a written answer to a query about pavement cycling by PCSO Sharon Birt.

She said: ““Cycling on the pavement is an offence but the government aren’t keen to hand out fines for this, unless people are cycling in a dangerous manner.

“Most people appreciate how dangerous the roads can be for cyclists and most are careful on the pavement. I generally find that people pushing wheelchairs and prams more often run into people than cyclists, albeit at a slower speed.

“The pavement is a shared space for all sorts of moving people/obstacles and we need to be mindful of each other. They are pushing councils to provide more cycle lanes which is a long and expensive process.

“The facility to hand out a fine was removed a while back, and so now a form is filled in and sent off to the ticketing office. They then make the decision if the cyclist should get a fine or a warning, so it’s not a guaranteed fine anymore.

“We only set days of action for areas that have a high number of accidents and calls. There are currently no areas that reach this.

“Generally there are rarely calls of cyclists coming into contact with pedestrians, so the need to spend time and resources on it isn’t there. This could be that people just aren’t reporting it, but as is always the case, if the calls aren’t coming in then it’s deemed there isn’t a problem.”

Inspector Brian McCarthy said: “Officers may stop cyclists and advise them about the dangers of cycling on pavements. We believe education is better than enforcement.

“Where we identify a particular problem we can consider days of action, but these need to be assessed on risk, threat and harm.”

PCSO Birt also said that policing cyclists going through red lights is nearly impossible, as they cycle away too quickly, and sending a response car after them would be a waste of public resources.