Police are appealing for witnesses to the robbery of a man at a Brighton bus stop. 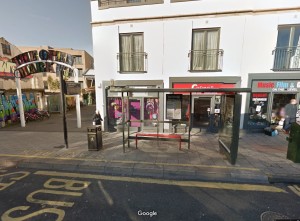 Sometime between 11.45pm on Tuesday 1 March and 12.30am on Friday morning, 2 March, the 41-year old man, who lives in Brighton, was attacked while waiting at the bus stop outside the Druids pub near the open market in Ditchling Road, Brighton.

He was punched and kicked and his wallet containing a small amount of cash and some cards was stolen.

The victim made his own way home and did not seek hospital treatment.

There is no description of his attacker or attackers at this stage but a group of three young men, believed to be in their teens, was seen nearby at the time and police would like to trace them. Two were described as black and one was described as white.

Detective Constable Dan Aubrey-Smith said; “Anyone who witnessed the incident is asked to contact us via 101@sussex.pnn.police. or by calling 101 quoting serial 43 of 02/03. Alternatively, you can call the independent charity Crimestoppers anonymously on 0800 555 111 (www.crimestoppers-org.uk).”