The Monday to Friday bus services number 78 to Stanmer Park and 77 to the Devil’s Dyke will be withdrawn from Friday 22 April. 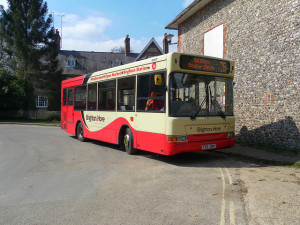 The 78 bus in Stanmer Village by Matt Davis on Flickr

The midweek buses, part of the Breeze up to the Downs service, were introduced last spring as a one-year pilot project. The services were funded from the government’s Local Sustainable Transport Fund which ends in April.

Although the services have proved popular, Brighton and Hove City Council has been unable to secure funding for a second year and, as a result, the mid-week buses will be withdrawn. The last buses will run on Friday 22 April.

Weekend services will continue to run as normal and the 78 will start again in the summer months on a commercial basis.

The council is currently exploring all possible options to secure funding to reinstate the services.

Councillor Gill Mitchell, who chairs the Environment, Transport and Sustainability Committee, said: “We understand that this news will be disappointing for many residents and visitors but the current budget situation has left us with no option but to withdraw the midweek service.

“I would like to reassure residents that we are doing everything we can to seek further funding to get the services reinstated.”

Estimates show that the cost of reinstating each service would be in the region of £90,000.

A midweek Breeze up to the Downs bus service to the Devil’s Dyke – number 77 – will run during the summer season from mid-June to early September as this will be run by Brighton and Hove Buses on a commercial basis.

There have been no cuts to the council’s general budget of £1.2 million for all other subsidised routes which includes school buses.