The city council is set to sell Brighton Centre to the owners of the Churchill Square Shopping Centre to help fund the building of a new conference centre at Black Rock. 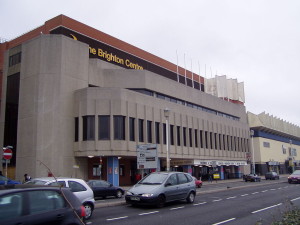 The plans, which were first announced in 2014, are due to take another step forward next Thursday when members of the council’s policy and resources committee will be asked to authorise an agreement with Standard Life.

The scheme would see the 1970s conference centre demolished to make way for an extension to the shopping centre and a residential tower block.

If this latest stage of the lengthy negotiations is agreed, the next stage will be to tender for an operator for the 10,000-seat arena and conference centre on the Black Rock site, referred to as Waterfront East. It’s hoped one will be appointed early next year.

Designs for both sites would also start to be worked on by both Standard Life and the city council, brought back to committee for agreement in spring next year, with a planning application to follow in 2018.

The council would make up the rest of the costs of the new venue from rent paid by the operator, plus new income streams such as additional business rates generated at Churchill Square, estimated to be as much as £8m more a year.

Committee chair and council leader Warren Morgan said:  “There’s a long way to go but this is very significant progress.

“The new venue is vital for the city, to ensure we can continue to compete with the bigger venues for the  large conferences and major act tours.

“Regenerating the seafront east of the Palace Pier is a priority for us, including the closed-off Madeira Terraces.  This development at Black Rock will help to unlock more investment along Madeira Drive.

“The retail scheme also gives us a way to hugely improve the seafront and public spaces around the current Brighton Centre and West Street.  It better links the city with the seafront and would give us a shopping offer of regional importance.”

James Stevens, Head of UK Development for Standard Life Investments, said: “We are very pleased to be making such significant progress on the Waterfront project.

“This is a genuine partnership between Brighton and Hove City Council and Standard Life Investments, providing a platform for major investment to regenerate key areas of the city.

“The developments will cement the city’s position as a leading retail, leisure, conferencing and entertainment destination.

“There is a long way to go, but we look forward to continuing our productive relationship with Brighton and Hove to deliver world class solutions.”

Extensive consultation with communities, businesses and interest groups is expected to start shortly.

The completed developments, worth an estimated £540m, are expected to create 2,000 jobs and boost spending in the city by £150m annually.  They would earn an extra £4.6m a year for the public purse.