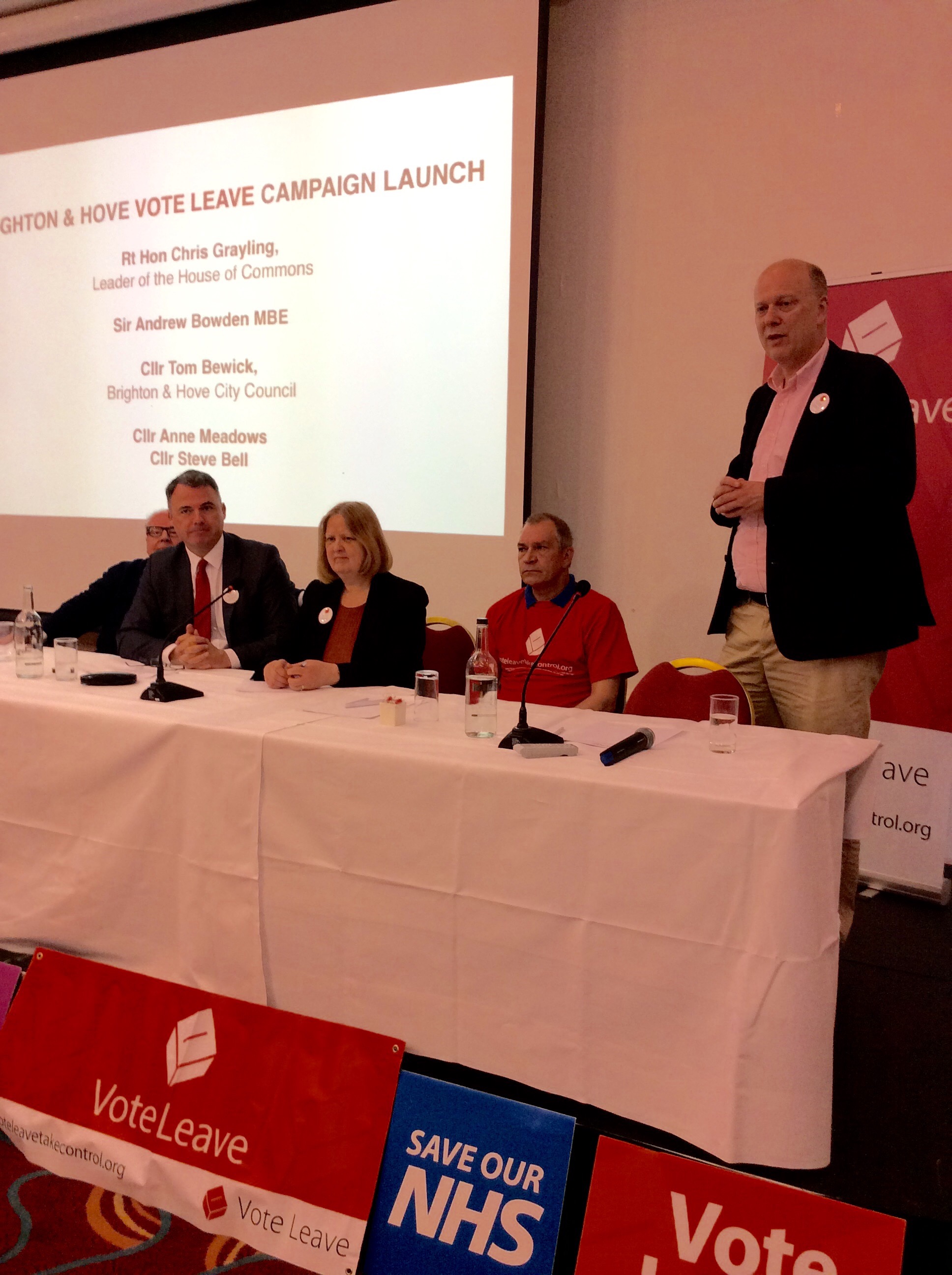 Dozens of people attended two events in Brighton as a cabinet minister fired up the cross-party Vote Leave campaign at the weekend.

Chris Grayling, the Leader of the House of Commons, spoke about the referendum on Britain’s membership of the European Union taking place next month.

After a photoshoot outside the Royal Pavilion, Mr Grayling addressed campaigners at the Jury’s Inn Brighton Waterfront hotel, telling them: “We’ve got an important job to do over the next eight weeks. 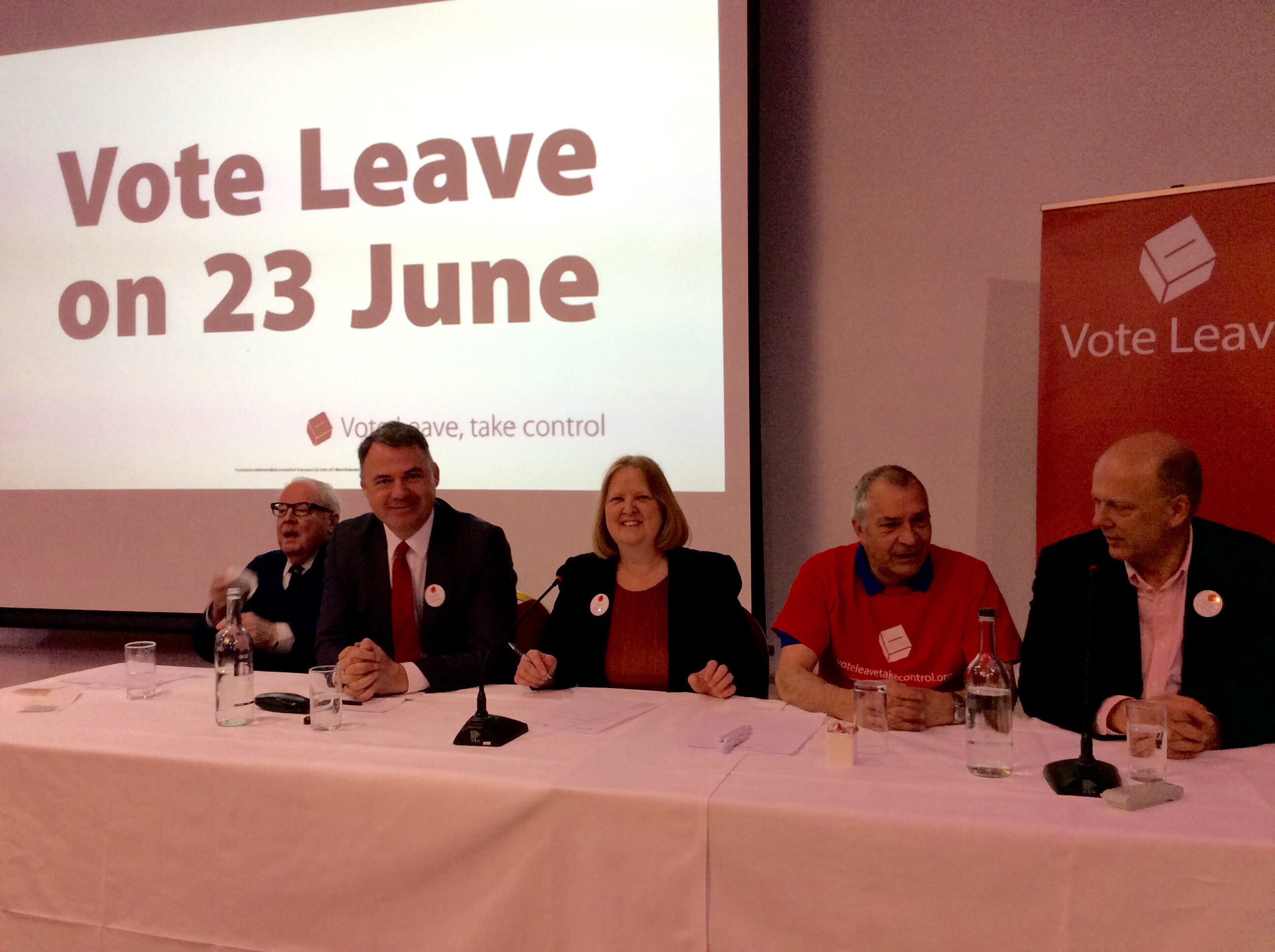 “Switzerland has managed to negotiate free trade arrangements with more of the world.

“We buy more from the EU than they buy from us. The discussion should be more about how they can retain access to our markets.”

He emphasised the need to win support in Brighton for the Leave campaign, saying: “We are in a cosmopolitan city, an outward-looking city, a thoughtful city.”

But, Mr Grayling said, it’s also a city where people want to get on the housing ladder, be able to see a doctor and choose a school for their children.

Those things were harder, he said, when we don’t have control of our borders and the number of people arriving in Britain is equal every year to a city the size of Newcastle.

Of migrants, he said: “They are great people who will make a great contribution to our economy but we can’t currently build fast enough to house them. 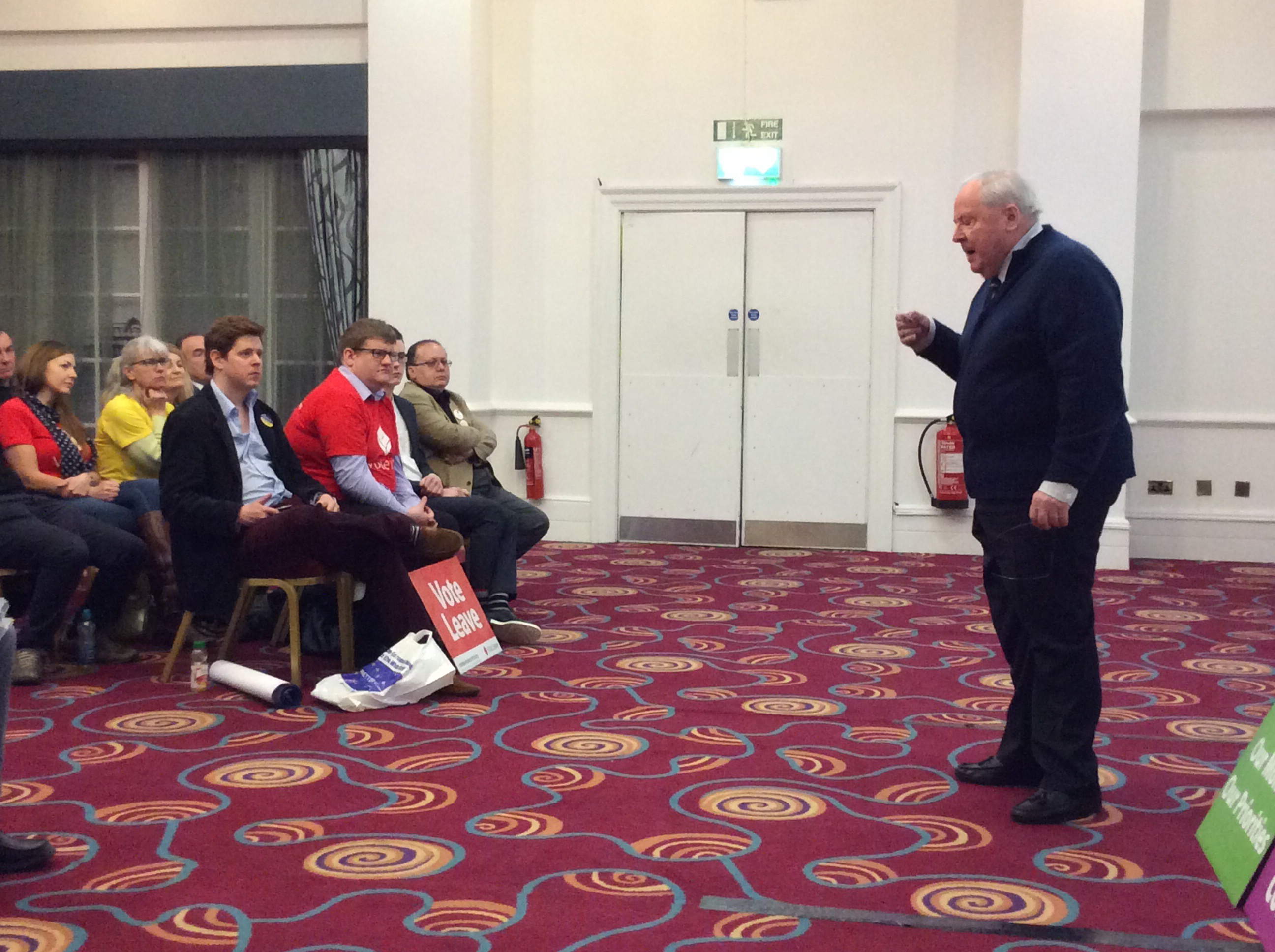 ﻿Mr Grayling also reminded supporters about the dire warnings by prominent Remain campaigners when the single currency – the euro – came into use.

But Britain had thrived outside the eurozone while countries like Greece and Spain had suffered.

He said: “The euro crisis is not over. The only way a currency union will work is if you have a political union.”

Mr Grayling added: “This is a country that wants to leave the European Union. There is a brighter future outside. Let’s make 24 June our Independence Day.”

He was followed by fellow Conservative and former europhile Sir Andrew Bowden, who served as the MP for Brighton Kemptown from 1970 to 1997.

He said that there would one day be a United States of Europe – “It won’t happen in my lifetime’. It may happen in my children’s but probably in my grandchildren’s.”

As a result, he said, Britain would have no control over ket foreign policy, military, economic and financial decisions.

Sir Andrew, 86, said: “In the last century we lost the dream of two generations of young people in two ghastly world wars.”

But because we never wanted another world war, Sir Andrew said, we signed up for something which we were told would bind us through trade.

Instead, we have ended up losing “our freedom, our rights and our sovereignty”.

He said that he voted to stay in when the last referendum took place in 1975 having been persuaded by Ted Heath, who was Prime Minister when Britain joined what was then known as the EEC (European Economic Community) – or the Common Market.

Sir Andrew said: “Ted Heath told me personally it was a trade treaty. He was not telling me the truth.”

The meeting, chaired by Labour councillor Anne Meadows, heard from another Conservative, Councillor Steve Bell, who said: “It’s good to see so many people here from all parties and none.

“It’s great to have Chris, Sir Andrew, Tom (Bewick), Anne and others, but what matters is the voice of the ordinary person on the street.”

He quoted the former Labour leader Harold Wilson, who was Prime Minister when the last referendum was held, saying that it’s a vote not just for yourself and your children but your children’s children.

Labour councillor Tom Bewick said: “We all care passionately about our country and want to take back control.”

He set the issue in an historical context, saying that the Battle of Lewes took place a few short miles away in 1264.

“Simon de Montfort led the fight against an overweening and tyrannical king,” Councillor Bewick said, “and in some ways that’s what we’re facing today.”

He criticised the European superstate, adding: “I run an international business. I’m not some little Englander.”

He said that he wanted to be able trade more freely with the economies of Asia and elsewhere and said that, outside the EU, Britain would be better placed to do that.

He also said that if Britain left the EU it would be better able to control public spending, deal with the pressure on local school places and on the National Health Service.

And, he added, “we could build even more of the starter homes we need in the city and Anne is leading on.”