Brighton’s newest theatre celebrated the opening of its second ever season with the smashing of not one, but two champagne bottles. 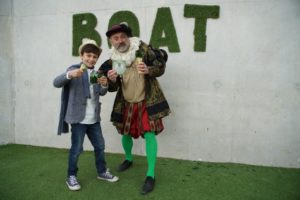 Brighton Open Air Theatre in Dyke Road park was built as the legacy of late Brighton playwright Adrian Bunting, who left his life savings to be put towards realising his dream of an al fresco performance space.

Last summer, just two years after his death, that dream came true and on Saturday, April 23, the theatre looked back on a successful first year, this summer’s season and many more years to come.

“We have got a lot of good people getting involved and it can only get better through the next 25 years.”

Taking place in BOAT from July 2 – 17, Starboard Festival is a new festival of performance for, by and with children from ages 0 – 21. See shows by local schools and companies alongside national work over the three weekends of the festival. (July 2 – 17, dates and times vary, visit http://www.starboardfestival.com/). Brighton Little Theatre stages Oscar Wilde’s classic comedy The Importance of Being Earnest (July 22 – 24, 7pm &amp; 2pm performances July 23 &amp; 24, £10  / £8) followed by Sisata’s adaptation of Thomas Hardy’s Tess of theD’Urbervilles, an enigmatic tale of virtue, love and injustice (July 26 – 30, 7pm &amp; 2pm performance July 30, £8.50 / £6.50).

The cream of Brighton companies come together at BOAT this month, startingwith Illyria’s production of Gilbert &amp; Sullivan’s Ruddigore (August 7, 3pm, £15) and followed by Much Ado About Nothing, a joint production from Brighton Shakespeare Company, The Treason Show and the Rialto Theatre (August 10 – 14, 7.30pm plus 3pm performances August 13 &amp; 14). Droll &amp; Folly’s production of George Bernard Shaw comedy Heartbreak House is set on a Sussex estate where rules are suspended, lovers switched and hierarchies reversed (August 16 – 21, 7pm plus 2pm performances August 20 and 21, £14 / £12), and Brighton Little Theatre returns with classic Gothic tale Frankenstein (August 25 – 28, 7pm plus 2pm performances August 27 and 28, £10 / £8).

Prepare for swashbuckling family fun as production company London Road sets sail for BOAT with their Treasure Island, another all-singing, all-dancing adventure from the creative team behind Emporium’s The Jungle Book, Sleeping Beauty and Into The Woods (September 7 – 11 &amp; 14 – 18, 7pm plus 2pm performances September 10, 11, 17 &amp; 18, £15 / £12). The pace switches with a radically reimagined staging of Thomas Middleton’s The Revenger’s Tragedy opens on September 21 fusing club culture, drag and black comedy in a story of rivalry, sexuality and bloody revenge (September 21 – 23, 2pm &amp; 7pm, £10 / £5). Old Herbaceous is a moving platonic love story centred on a man in the same gardening job for his whole life (September 24, 3pm, £14) while the season goes out on a high with the arrival of 24-piece vocal ensemble The Soweto Singers who will see out the summer with ‘an exhilarating towering of joy.” (September 28 &amp; 29, 7pm, £15 / £10).