And the retired chief superintendent’s debut book is due to go on sale in just under two months’ time. 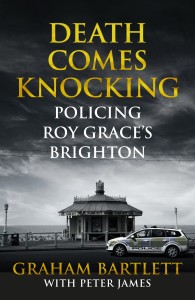 Mr Bartlett, 51, who joined Mr James for a launch event in Brighton for his latest crime thriller Love You Dead, is featured in the most recent edition of the Bookseller.

The trade magazine said that Mr Bartlett had always had an urge to write but unsurprisingly his work got in the way.

Having spent the final years of his 30-year career with Sussex Police advising Mr James with his research, he was able to turn the tables and enlist the author’s help.

The Bookseller points out that Mr Bartlett was not the inspiration for Roy Grace, the detective featured in a dozen of Mr James’s novels. That was Dave Gaylor.

Mr Bartlett does make a number of appearances though as Graham Barrington.

The trade mag quotes Mr Bartlett as saying: “The way in which Peter wrote about the police, and got the detail but also the nuances of policing spot on, did us huge favours as it gave the public a real understanding of what we go through as police. It’s fiction but it reflected the reality.”

And the magazine added: “Death Comes Knocking turns this on its head, presenting the reality and reflecting on the fiction. 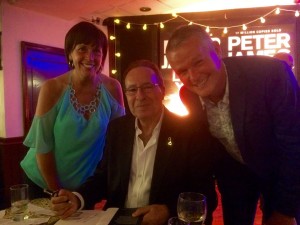 Graham Bartlett, right, with his wife Julie and the author Peter James at the launch of Love You Dead

“It is surprisingly personal – and all the better for it. Bartlett, for example, describes the emotional turmoil he goes through when attending a cot death at a time when he and his wife were struggling to conceive (they eventually had triplets), the difficulty police have delivering ‘the death message’ and the harsh reality of arresting a colleague gone wrong.

“But at the heart of the book are the crimes, the villains and the cops who deal with it all.”

The Bookseller quotes Mr James describing the collaboration: “It’s also a book about human nature as much as it is a book about criminals.”

And Pan Macmillan said: “The authors skilfully evoke the dangerous inside story of policing, the personal toll it takes and the dedication of those who risk their lives to keep the public safe.”

Death Comes Knocking, published by Pan Macmillan, is due to go on sale on Thursday 14 July. The 320-page paperback is priced at £7.99 and the Kindle ebook at £4.31.