A Brighton schoolgirl has won first place in an international art and poetry competition set up to commemorate the centenary of The Great War. 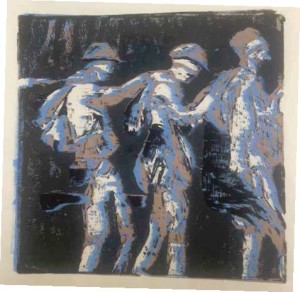 Tallulah Pudney’s “The Blind Leading The Blind” artwork took the prize at the Never Such Innocence Poetry and Art Competition, set up to ensure children understand the great global sacrifices made during the First World War and to encourage young people to actively learn about their shared history and heritage

Tallulah, 14, who studies at Brighton College, was presented with her winning certificate by Vice Chief of the Defence Staff General Gordon Messenger at a ceremony at the House of Lords this month.

The competition received some 1600 entries from all over the globe and the judging panel included renowned artists Charlie Barton, William Packer and Jessica Carlisle and well as two Chelsea Pensioners.

The Never Such Innocence charity was set up by Lady Lucy French and has been running since 2013. Lady Lucy said: “In early 2013 a coalition of the willing and I set out to find a means of commemorating the Centenary of the Great War ensuring young people nationally and internationally were given the opportunity to play their part, engage and feel important during this centenary period.

“The judges spent long hours deliberating on the winners. Our young people have moved not only the committee and our judges but governments, senior members of the military, writers, artists and our valiant veterans. We have all shed heartfelt tears in awe of the children’s emotional intelligence, their profound thoughts, their poignancy and care.”

Tallulah said: “I was highly inspired by the painting ‘Gassed’ by John Singer Sargent which led me to interpret the aftermath of a Gas attack in the First World War. I created my work using a lino printing process which was popular amongst the German Expressionists who confronted the devastating experience of the First World War. ”

Her art teacher at Brighton College added: “We are absolutely thrilled for Tallulah to win such a prestigious prize. The subject is a poignant one
and Tallulah’s artwork shows great maturity in understanding the needless suffering that took place.”

After the last competition, in 2018, all the winning entries will be collated into a book to be preserved for generations to come.

Academics strike over pay at Sussex and Brighton unis tomorrow