A charity chief executive from Brighton is undertaking a 160-mile personal walking kayaking and canoeing challenge to boost fundraising for disaster victims.

Aleema Shivji, who runs Handicap International UK, is leading from the front as she tackles the South Downs Way in five days before canoeing the Great Glen Way in Scotland.

Ms Shivji, who lives near the Seven Dials, urged the public to back her efforts after winning extra support from the government – for a limited period only. The charity’s campaign is called Every Step Counts.

She said that the government had promised to double every pound raised by Handicap International UK until Monday 18 July as the charity continued its work in places like Nepal which was hit by a devastating earthquake just over a year ago.

She said: “I am walking, kayaking and canoeing for Handicap International UK because disabled people shouldn’t be left behind.” 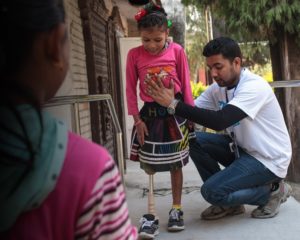 Those motivating her fundraising drive include eight-year-old Nirmala who lost her right leg in the earthquake in Nepal.

She said: “A year on, thanks to our physiotherapist Sudan, she has not only learnt to walk on her prosthetic leg but also to laugh.

“When you’re learning to walk again, every step counts. And we’ve been with Nirmala every step of the way.

“Sadly, in many countries, disabled and injured people struggle to access the care they need and find themselves excluded.

“We aim to raise vital funds to help them by supporting sustainable rehabilitation care in countries that need it most.

“Having worked with Handicap International for 11 years now, including in countries like Haiti where we supported thousands of injured people after the major earthquake, Sri Lanka, South Sudan and many others, I have seen first-hand the impact our work makes on the lives of people with disabilities and life-changing injuries.

“When we recently launched our Every Step Counts campaign to raise funds to help people like Nirmala walk again, and given my past as a physiotherapist, I felt compelled to set myself a very ambitious challenge.”

As an example of how the money would be spent, she said

And donations, she said, would go to countries where Handicap International provides disabled people with essential rehabilitation care, including Nepal, Jordan and the Democratic Republic of Congo.

Aleema Shivji was in Nepal just weeks before the earthquake struck. She spoke about the visit on The Vote on Latest TV last month and blogged about her visit recently under the heading: “Getting ready to face natural disasters – My trip to Nepal ahead of the 2015 earthquakes.” 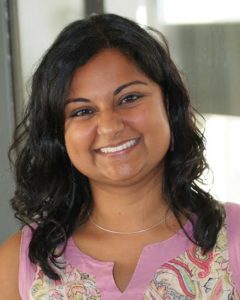 She wrote: “In a world where natural disasters occur ever more frequently, being ready to face a disaster can make a real difference to the life of so many people.

“Imagine if you lived in an area at risk from an earthquake, flood or tsunami – you would want to know what to do when faced with such a disaster.

“Well that is exactly what Handicap International is doing in a country like Nepal. Long before a 7.8-magnitude earthquake hit central Nepal in April last year, we had already been working with the Nepali Ministry of Health and the major hospitals to strengthen their capacity to respond to a potential large earthquake in the Kathmandu Valley.

“Nepal is one of the 20 most disaster-prone countries in the world. Out of 200 countries, it ranks 11th and 30th, respectively, in terms of vulnerability to earthquakes and floods.

“A few weeks before the 25 April earthquake, I was in Kathmandu visiting this very earthquake-preparedness programme.

“Initially trained as a physiotherapist and having led Handicap International’s health response in the wake of the Haiti earthquake in 2010 as well as many other disaster responses for the organisation, I was particularly interested to see what we were doing to prepare for the earthquake to come.

“Little did I know at the time that the projects I visited would be tested only a few weeks later.

“During my visit, Suniti, one of our Nepali team members, walked me through central Kathmandu, through narrow, bustling streets, surrounded by tall buildings, all squashed together.

“It became quickly apparent to me that if an earthquake hit this city, the devastation would be immense.

“And from past experience, I knew that meant many people would suffer from injuries such as fractures, amputations and spinal injuries, requiring urgent rehabilitation to ensure their survival and reduce the risk of long-term disabilities.

“We also visited the main hospital in the city, where we have been working with the Ministry of Health and hospital staff to prepare for a huge influx of casualties in the event of an earthquake.

“One of the Nepali doctors we met explained how our team had been working with him to train medical staff on injury management, to pre-position equipment like wheelchairs and other devices for immediate use and to map out where to place extra operating theatres and triage areas to deal with huge numbers of injured people.

“The work that Handicap International had done in Nepal before the earthquake has had a huge impact on the effectiveness of the emergency response.

“Our teams and the health professionals trained were able to immediately manage a very large number of casualties.

“Within hours, our local team accessed the pre-positioned stocks we had set up and got things like wheelchairs and other equipment into hospitals for immediate use.

“Most importantly, the number of amputations performed on casualties was limited thanks to the training and care protocols developed by our organisation and widely distributed to medical teams.

“One year on, Handicap International teams are still in Nepal, providing essential rehabilitation care and support to disabled, injured and vulnerable people.

“Since last April, we have provided an amazing 16,000 rehabilitation sessions to 6,200 patients and distributed 4,700 mobility aids such as crutches and wheelchairs.

“Looking back now, I am immensely proud of what our Nepal team has achieved and all the disabled and injured children and adults who we have been able to help and will continue to help in the months and years to come.”