Sunlovers are being warned to be careful when throwing away disposable barbecues after firefighters were called to three bin fires along Brighton and Hove seafront within the space of half an hour last night. 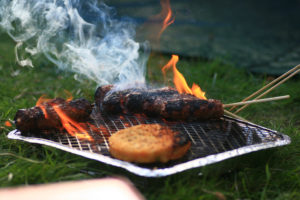 The first fire broke out at 9.30 last night in Madeira Drive, with another reported just 15 minutes later in Dukes Mound caused by a disposable barbecue. Firefighters from Roedean attended both blazes and used hose reel jets to quench the flames.

Another smouldering barbecue sparked a bin fire less than ten minutes later in Kingsway in Hove, which firefighters from Hove attended and used a hose reel jet to put out.

David Kemp, Community Safety Manager for East Sussex Fire and Rescue Service said: “With the warmer weather now here, we expect people to be heading outdoors to light up the barbecue and we want people to be aware of a few basics to help keep them safe when cooking outdoors.

“The use of flammable liquids to help light a barbecue can be very dangerous and while it can be tempting to give coals a helping hand, it could leave you scarred for life. Instead, get your BBQ started well in advance to give it a chance to heat up on its own.

“Make sure it is placed away from trees, fences, sheds and tents and have water nearby should you need it.

“Before disposing of barbecue coals, please ensure that they are completely cool, and if you have to move the BBQ then cautiously fill with water from a jug, being aware that hot steam will be produced. The best option is to leave for a good 24 hours to cool down properly. Most importantly, if a fire starts, dial 999 and alert us immediately.

“We want everyone to enjoy the great outdoors safely and just a few simple steps will help protect you, your loved ones and your property from harm.”

The fire service has warned that if you are camping it is important to never bring a BBQ inside a tent, or enclosed area, because deadly carbon monoxide continues to be given off even from cooling coals, putting people at risk.