Two men jailed for raping a woman in a Brighton hotel

Two men have been jailed for raping a drunken woman in a Brighton hotel room.

Titus Gulu and Abdulla Rashid were sent to prison for 10 and 12 years respectively after being found guilty of the offence.

Sussex Police said: “The pair had been drinking in Brighton in the early hours of (Friday) 28 February 2014 when they invited a group of friends – previously unknown to them – back to their room at the Royal Albion Hotel in Old Steine.

“This included the victim, whose friends left a short while later, leaving her alone with the two men. 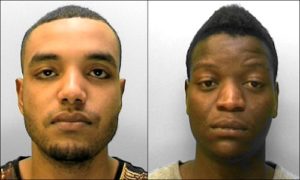 “Due to her intoxicated state, the 21-year-old, from Worthing, went to sleep on the bed before she was raped by the pair.

“Police became aware of the incident after she was encouraged to report it several days later.

“The suspects were identified by officers who traced their details back to the booking for the room.

“Gulu, 25, unemployed, of The Lawns, Lancing, and Rashid, 24, a student, of Barking in Essex, were subsequently charged with rape, which they both denied.

“They were sentenced following a trial which concluded at Hove Crown Court on Friday 10 June.”

Detective Constable Tom Duffy said: “This was a particularly nasty case in which Gulu and Rashid befriended a vulnerable young woman on a night out in Brighton and took advantage of her in her drunken state.

“Their sentences serve as a reminder that we fully investigate all reports of sexual offences and those caught and convicted will be dealt with robustly.

“I would also like to encourage anyone who feels they may have been the victim of a sexual offence to come forward. We are there to help and to bring criminals like these to justice.”