Remainers to hold show of unity at the Level tomorrow evening

Scores of Remain voters are expected to gather at the Level tomorrow evening for a show of unity following last week’s referendum. 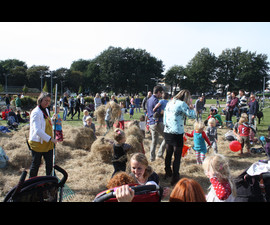 Organisers of the Stand Together event, one of several taking part across the country, say they are not protesting the result, but calling on people to come together and reflect.

Since the results came in on Friday morning, there have been reports of incidents of racist language shouted at people up and down the country. Although none have been reported to police in Brighton and Hove, an 11-year-old girl was taunted by a group of teenage boys in Horsham on Saturday.

And on Saturday afternoon, a Refugee Week event in Brighton was heckled by a man who shouted: “Don’t you know our borders are now closed”.

Council leader Warren Morgan, who was at the event, said: “Let me be clear that many who voted Leave are not racist, had a valid case for ending our membership of the EU, and who distanced themselves from some of the appalling rhetoric used by some during the campaign.

“Many people have, in the hours since the result, spoken of their fears, of the open abuse, of the uncertainty about their place in this country that they are now experiencing.

“This cannot be our future; one built on the prejudices of the past. Not here.

“Brighton and Hove is an international city, facing the European continent across the narrow Channel that separates us physically if not culturally or economically from mainland Europe.

“Our city depends and thrives on tourism, healthcare, culture and businesses that in turn depend on being open to Europe and the world. We are indebted to those who come here, spend here, live here, pay taxes here, employ here, study here. I send out a clear message that you are just as welcome tomorrow as you were yesterday.”

The organisers of the Stand Together event, which starts at 5pm, say: “There’s been much sorrow and anger after the referendum result. Whilst understandable, we believe it’s now time to come together.

“It’s sad also to think that some people across Europe now think of Britain as non-inclusive, closed and inward-looking. We believe that Britain is better than that.

“Stand Together is our mark of showing that – in consideration of the EU Referendum result – we stand alongside the people of Europe to show we are inclusive, open and patient to all, regardless of age, gender, race, demography, location, and whether they voted Leave or Remain.

“We believe that the best way forward is to understand people’s emotions and reasonings, and allowing for a space to reflect on the past and the actions leading to the referendum outcome. In doing so, we hope to help change the dialogue from something negative and divisive to one of hope.

“We want to stand in solidarity with the entirety of the UK and Europe to say we’re here, we’re open, and wanting to understand how best to go forward in a positive manner.”

Sussex Police said it had received one report of referendum-linked hate crimes in Sussex, when an eleven-year-old girl was subjected to racially aggravated threatening behaviour by a group of teenage boys in Southwater Country Park near Horsham on Saturday evening. Enquiries are ongoing.

It is urging any victims of other hate crime to report attacks, either via 101@sussex.pnn.police.uk or by calling 101 or online via www.sussex.police.uk.