Thieves have stolen paving slabs from the Patcham Peace Garden, a war memorial created after the First World War.

They took out a roadside barrier before they dug up and stole tons of heavy York stone slabs from the memorial in Old London Road, Brighton.

Other slabs were left stacked, having been dug up, as though ready for later collection.

Patcham Ward councillor Lee Wares said: “In the week following the centenary of the Battle of the Somme it takes a very evil and wicked person to carry out such an atrocious act.”

Sussex Police said that the thieves had caused damage estimated at about £5,000, adding: “Offenders are believed to have struck at some time between 1pm on Tuesday (12 July) and 9.30am on Thursday (14 July) when the theft was discovered.

“Police would like to hear from anyone who may have seen any suspicious activity or vehicles at the gardens or who knows where the missing slabs might be.” 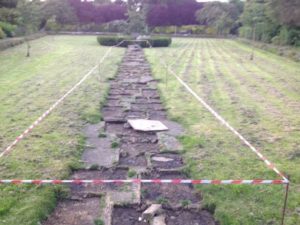 Councillor Wares said: “The theft in itself is bad enough but to destroy an area that people use to reflect and remember their lost ones is utterly despicable.

“It must have been a carefully organised theft to have taken up and removed tonnes of paving stones in the middle of the night without attracting attention.”

The gardens were bought by the council in 1928 and thought to be a memorial to peace after the Great War of 1914-18.

Last year the three-acre gardens were given the protection of Fields in Trust status having been carefully and lovingly maintained over the years by residents and the council. 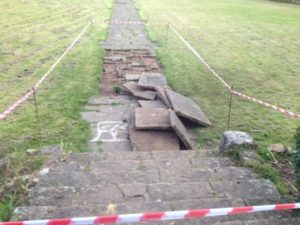 Fellow Patcham councillor Carol Theobald said: “It is a very sad day. I know personally the many residents and volunteers who give their time to keep the gardens in a beautiful condition.

“There are many tributes and memorials in the garden in the form of benches and trees. I know everybody will be heart-broken at what has happened.”

Councillor Geoffrey Theobald, who also represents the ward, added: “This is a shocking theft and not one that you would ever contemplate happening.

“The council do not insure such things and, for now, I don’t know how we will be able to restore the gardens.

“We will work with City Parks to try to restore the garden as soon as possible and I only hope that the police are able to catch these vile people and bring them to justice.”

Anyone with information that could help the investigation is asked to phone Sussex Police on 101, email 101@sussex.pnn.police.uk or call the independent charity Crimestoppers on 0800 555111.