Four more family homes are to be built on the site of an old playing field in Hove.

The two pairs of four-bedroom semi-detached houses are to be built in the grounds of the long-closed Alliance and Leicester Sports and Social Club, off Rowan Avenue, in Hangleton.

The Lions Gate block of 39 flats was built just over 10 years ago and neighbouring homes were approved a year ago and are being built.

But Brighton and Hove City Council officials urged planners to turn down the latest in a series of applications for the site.

The council’s Planning Committee, meeting at Portslade Town Hall this afternoon (Wednesday 3 August), decided that the need for housing overrode concern about the loss of open space, overlooking and the potential loss of neighbours’ amenity.

Hangleton and Knoll ward councillor Dawn Barnett said: “This proposal has been dragging on for years. It’s about time we got on with it and build the housing this city so desperately needs.” 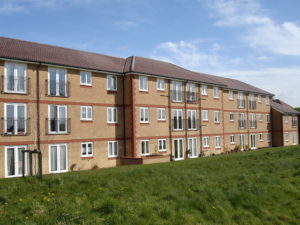 Councillor Barnett said that there was a housing shortage, with more than half of the new homes in Brighton and Hove coming from small schemes.

Referring to the recommendation to refuse the scheme, she said: “It’s very disappointing … Schemes like this are vital. Five homes on the adjacent site were given planning permission last year and are currently being built.”

The proposed houses would be much-needed decent-sized family homes, she said, adding: “End the years of uncertainty around this site.”

Mr Coomber, of Stiles Harold Williams, said: “This site does not encroach into the allotment site (and) the buffer zone is not required.

“You’re being asked to decide between a buffer zone between some allotments – an orchard that might not be built – and some much-needed housing.”

He said that compared with other parts of the area, the impact on amenity proposed here is very modest.

Councillor Joe Miller said that the alternative proposal by the council – for an orchard that was currently scrub land – would potentially be worse for neighbours, with more possible overlooking. He said: “Four houses would be better than that slice of open space.”

Councillor Adrian Morris and Councillor Lynda Hyde echoed his remarks. Having visited the site, she said, she did not have concerns about overlooking.

Councillor Clare Moonan said that she was concerned about the density of the proposal – the homes were “squeezed in” – and she was worried that it would just remain scrubland for the foreseeable future. And the

Councillor Leo Littman was concerned about the loss of a green space but said: “The reasons (for refusal) don’t really stack up for me.”

Councillor Les Hamilton said that the site was over 1,000 square metres and that City Parks already seemed to be struggling with its obligations.

Councillor Julie Cattell said that the choice was between an orchard that might not happen and much-needed housing. She added that it might be hard to defend a refusal for the reasons given in the official report.

Nine councillors voted in favour of the plan for homes with two abstentions.