An £11 million scheme to demolish and rebuild the Victorian shelter hall on Brighton seafront has been approved by councillors.

The application – by Brighton and Hove City Council – was approved by the council’s Planning Committee at the first meeting held in the newly refurbished council chamber at Hove Town Hall.

As part of the plans a new kiosk will also be built on the upper promenade opposite the bottom of West Street – a junction used by 36,000 cars, vans and lorries a day, 30,000 pedestrians and 2,500 cyclists.

The old kiosk is likely to be moved to the seafront near the bottom of East Street.

A report to members yesterday (Wednesday 14 September) said: “Planning permission is sought to demolish the existing Shelter Hall building and external public steps from the upper to the lower promenade.

“The current building partially holds up the A259 seafront road and is structurally unsound.

“It is proposed to erect a new two-storey building at the lower promenade level incorporating partial mezzanine floor.”

The building is expected to house a shop, restaurant and seafront public toilets.

The report said that the replacement building would have more than twice the floor area of the 19th century original and would project further south towards the sea.

It said: “It would have a similar geometric design incorporating some traditional elements although it would be a contemporary design.

“A single-storey rotunda building for use as a café/restaurant is proposed on the upper promenade level to replace the previous listed hot food take away kiosk that was recently removed for re-erection elsewhere on the seafront.

“The new building would be significantly larger than the previous kiosk and would be located on a raised podium … reached by a set of open steps and ramps.

“New external public steps are proposed from the upper to lower promenade of a different orientation to the promenade than previously and they would have traditional railings to match the existing listed railings along the seafront.

“As landowner, the council is the applicant for this scheme. As it involves a partial highways structure, this scheme is primarily funded (with £9 million) by the Department for Transport from the government’s Highways Maintenance Challenge Fund.”

The council is putting in £1.7 million from the Local Transport Plan. 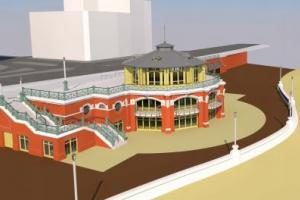 lighting have recently been completed by the Highways Team separate to this application under ‘permitted development rights’.”

Planning Committee members were shown pictures of the interior which is currently supported by props at a cost of more than £100,000 a year.

They were told that the scheme would double the commercial space, bringing in vital revenue for the council which could contribute to future upkeep of the seafront.

The junction of West Street and the A259 King’s Road above would also be remodelled to improve safety and the environment.

Work started on the first phase of the project in October last year. The next phase will mean closing the pedestrian tunnel under the seafront from Monday (19 September) until next spring. The aim is to reopen it before Easter.

The plans were broadly welcomed, with some reservations. It was pointed out that the council – as landowner, applicant and developer – had behaved in ways that it would not tolerate from others. 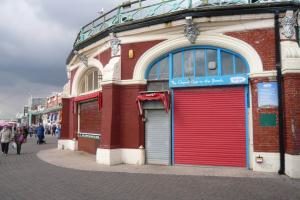 The structurally unsound Shelter Hall on Brighton seafront is to be rebuilt after the previous tenant, the Riptide Gym, was forced to move out because of the condition of the building

The Conservation Advisory Group said that it welcomed the proposal in principle but recommended that the Planning Committee refused the plans because “the information provided is either inadequate or inconsistent”.

Conservation Advisory Group representative Jim Gowans was diplomatic in his criticism of the council for not sharing its plans, particularly the detail, early enough and fully enough with the public.

He added: “Perhaps the applicant could ensure the railings are painted at least every century and do not fall into a state of disrepair.”

Councillor Carol Theobald said: “The city is very lucky to have £11 million funding for this. I’m very impressed with the design. I think it’s a great improvement for the seafront. It’s wonderful.”

Councillor Lynda Hyde said: “It’s extremely poor that the Conservation Advisory Group was not consulted in an appropriate manner – the plans are not perfect but they’re very good, particularly as the applicant is the council.”

Councillor Lloyd Russell-Moyle said: “It is a really rather magnificent plan. It will be an asset and I will be voting for it.”

Councillor Julie Cattell, who chairs the Planning Committee, said that the new building would be putting back something that hasn’t been used for its original purpose for many years.

The Shelter Hall would once again offer shelter from the weather – wind, rain or hot sun – for a cup of tea.

She added: “This is a vital project to keep the seafront road operating. At the same time it will greatly improve the environment around the bottom of West Street and generate revenue which could help maintain the fabric of the seafront into the future.”