Pebbles under Palace Pier fenced off to stop homeless camps

A popular camping area for rough sleepers is to be fenced off because of issues with fires and drug paraphernalia. 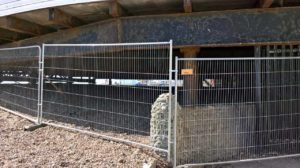 The temporary fence underneath the pier. Picture by Ken Frost

The beach under the Palace Pier is often used by homeless people over the summer as a shelter, and tents are sometimes erected under the boardwalk.

Fencing and gates have already been put around the concrete walkway has already been erected, but a temporary fence has now been put up around the beach itself – and a permanent one is due to be installed soon.

A council spokeswoman said: “We are installing permanent fencing for the reasons you’ve stated [fires started and needles often found discarded]. It will be installed next month and in the meantime the area has been secured with temporary fencing.”

Anne Martin, general manager at the Palace Pier, said: “The council’s seafront office are experiencing problems with the drug taking under there. People do set fires and we have to have them removed.

“We totally understand why they’re doing it because it’s quite dangerous and with the children playing on the beach, they don’t want to be picking up syringes and other debris.” 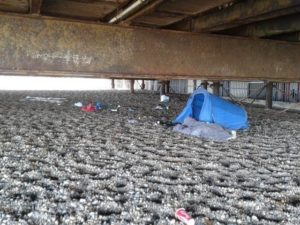