A thousand more Brighton commuter seats promised – but not until 2018

Consultation on a new timetable for the Brighton mainline and coastal routes begins today, with more trains for commuters promised as part of the biggest shake up of train times in a generation – but passengers will have to wait for two years for improvements. 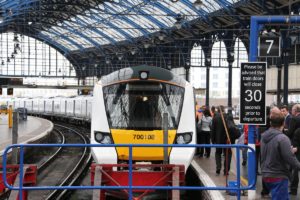 Both Southern and Thameslink’s timetables are being completely redesigned from 2018, with more trains due to be scheduled from both Brighton and Hove stations to London, and more coastal routes too.

The changes will see six more trains a day for Brighton commuters travelling at peak times (five in the morning, one in the evening), and three for Hove commuters, all in the morning.

The rail company is also promising 1,000 extra seats through longer Thameslink trains from Brighton, a rise of 19%, and from May 2018 new, direct all day train service between Brighton, Gatwick Airport, Central London and Stevenage and Cambridge.

It’s hoped the improvements will also make the service more reliable by “reducing the domino effect in times of disruption”.

A consultation event will be held in Brighton on Thursday, 6 October from 5pm to 7pm. A factsheet about changes to the Brighton mainline can be seen here and a station by station comparison of current services with the new timetable here.

Phil Hutchinson, who is leading the timetable development and consultation for GTR, said: “We are proposing a complete redesign of the timetable by looking at which journeys are most important to passengers. We are creating more capacity and new cross London routes with connections to Crossrail and more punctual and reliable services.

“Operationally, each route would be self-contained so that if a problem occurs it does not affect other routes.

“We want passengers and stakeholders to help us shape their future train service so we are consulting, we think, earlier than any train operator has before.

“This is a real opportunity for passengers and stakeholders get involved in an open, honest and transparent conversation about what the train service should be in the future.

“This is about creating better connections and more capacity. It’s a once-in- a-generation opportunity to restructure the timetable to give passengers more trains and the much better reliability we all want. Ultimately this will put the Thameslink route at the heart of the UK rail network.”

However, a spokeswoman for the Association of British Commuters said: “The new timetable shake up is yet another smokescreen from GTR, expressing merely the intention to normalise some trains and timetables while all are still, in effect, unliveable.

“We distrust entirely GTR’s ability to provide improvements when it is already clear that the company has failed to provide the level of service required under the franchise agreement.

“GTR has collapsed due to long-term and entrenched mismanagement, the true nature and extent of which lies recorded in redacted and undisclosed documents that the DfT have failed to release, despite our specific requests for them to do so.”