The ex-chair of Brighton and Hove’s Labour party has been secretly filmed telling a crowd of Momentum supporters the best tactics for deselecting Hove MP Peter Kyle. 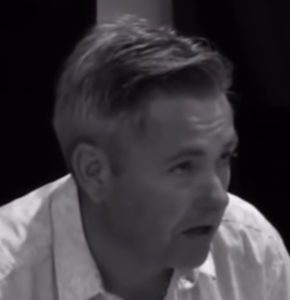 Mark Sandell was elected chair of the city’s Constituency Labour Party (CLP) in July on a pro-Corbyn slate, but the results were voided five days later after a raft of concerns with the ballot were flagged up to the party’s head office. The party will be deciding what should happen to the CLP at a meeting tomorrow.

Local members were also concerned that Mr Sandell, who says he first joined the party in 1986, let it lapse, and rejoined after Corbyn was elected, is in fact a member of the Alliance for Workers’ Liberty (AWL), a proscribed group in the party which has openly stated its aims to infiltrate Labour.

Mr Sandell was filmed twice by undercover reporter Gesh Mohammed for C4 Dispatches for a documentary which will be broadcast tonight at 7.25pm.

Speaking about Mr Kyle, he said: “[he] must be feeling fairly nervous — and I’ve got to say he’s got every reason to be, they’re all fairly nervous”. He added: “This guy is not going to be hard to unseat.”

He also said about Labour party officials: “I think we should have some redundancy notices ready for some of these people, because it seems to me, that if we don’t change… not just the leadership of the party, we want to keep Corbyn obviously, if we don’t change some of those structural problems, we will be fighting with people at our backs, who are just looking for the first opportunity, to sink the knife in.”

In a response published on social media, Mr Sandell criticised the secret filming, acknowledged he was an AWL supporter and said: “Boundary Commission changes to Brighton and Hove constituencies will make a selection process almost inevitable. And, given that Peter Kyle will not even join a junior doctors’ picket line, I very much doubt I will be supporting him.”

Mr Sandell’s association with the AWL, which has called on hard-left supporters to “flood” the Labour party, is documented here, as well as the party’s stated intention to “intervene” in the Labour after Jeremy Corbyn’s election.

Following a Times story about the Dispatches documentary yesterday, Labour MP Gloria de Piero said she remembered Mark Sandell as an AWL leader in the 90s.

Interesting mountford and sandell so prominent. They were AWL leaders 20 odd years ago when i was involved https://t.co/sD9gC4L5XK

Meanwhile, former Hove MP Ivor Caplin has called for electronic voting for the next Brighton and Hove CLP elections to ensure that the city’s full 5,000 strong membership have a better chance to have their say.

About 600 people took part in the voided elections, which happened shortly after a Momentum rally. The overall membership of the local party has shot up since Jeremy Corbyn’s election last year.

He said: ” The technology is available for all 5000+ members of our party to take part by using the systems that we have used in other Labour elections.

“This will ensure that everyone of our members can take part rather than having to attend a meeting which are often at difficult times for many people to attend. This way everyone can take part and I am sure that there will be unanimous support for such a democratic approach to these elections.

“It will also require candidates to have a proper honest approach to members as to what they will do to ensure Labour retains control of the city council and wins not just one but all three seats across Brighton and Hove in the General Election.”

Tonight’s programme is the second of three TV documentaries which examine the crisis in the wider Labour party with a focus on Brighton and Hove.

Last week’s Sky programme, the Battle for Labour, featured interviews with local party members from both sides of the Labour divide, including Greg Hadfield, whose election as CLP secretary was also voided, and Hove MP Peter Kyle.

Mr Hadfield, who in the last days has been both calling for party unity on Twitter and repeating his attacks on local Labour members, said: “The five candidates who won more than 66% of the vote happened to suggest they supported Corbyn. The two things are connected.”

Mr Kyle said: “Of course I [worry about deselection] They have the numbers.

“Everything is in our membership now – we have the people who are young and utopian we have people who are older who have suddenly decided after all these years of voting Labour that they want to get into the fight because of what the Tories are doing.

“But we also have the Trotskyites and the revolutionists who come in in small numbers.” The interviewer asks him if they’re coming in small numbers, why is it a problem and Mr Kyle reponds: “Have you ever been in a room with one of them?”

The final programme is BBC Panorama’s Labour: Is the Party Over? which also airs tonight, at 8.30pm on BBC1.

Meanwhile, Mr Kyle was also interviewed on the Sunday Politics show yesterday responding to Jeremy Corbyn’s offer of an olive branch to members of the PLP who have opposed him, saying that Mr Corbyn is “the first person to use an olive branch as a weapon to beat people”

Jeremy Corbyn is first person to use “an olive branch as a weapon to beat people with” @peterkyle tells @afneil https://t.co/bLQXAK8OsT

And yesterday, he tweeted this meme in response to continued calls on Twitter for his deselection: