A noodle bar has been given approval to open in a busy Brighton street after an appeal to a planning inspector.

The takeaway will take over the Green Chair café premises in Queen’s Road, Brighton, next to the Hope and Ruin pub, near the corner of Church Street.

The planning application – for a change of use – was made by Pavel Preobrazhenskiy, of Shelton Street, London, to Brighton and Hove City Council in February.

The council turned down the plans in April and Mr Preobrazhenskiy appealed against the decision.

The planning inspector said that a key issue was the council’s aim of ensuring the vitality and viability of the regional shopping centre.

The other main issue revolved around the living conditions of people living near, with particular concerns about noise disturbance and smells. 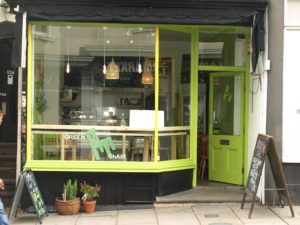 Green Chair is due to become a noodle bar

After a site visit last month the inspector, C Jack, said: “The overall effect … as a result of the change of use would be very limited, such that it would not have a significant impact on the overall function of the area.

“In contributing to the sustainable mix of uses in the area, the proposal would generate a small amount of additional local employment and help support the early evening economy.

“The proposed change of use would support rather than harm the vitality and viability of the regional shopping centre.”

The inspector imposed planning conditions restricting the hours of opening to 8pm “in the interests of the living conditions of nearby residents”.