A stalemate between rail bosses and the union failed to break as talks broke down yet again today, with commuters facing yet more disruption from strike action scheduled until December. 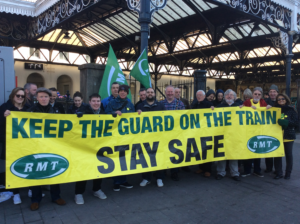 The dispute, which started in April over Southern’s introduction of driver-only operated trains and the downgrading of the guard role to a customer service position has now narrowed to the issue of whether or not a second member of staff is guaranteed on all trains.

The RMT says this is vital for customer safety – but Southern wants the flexibility of allowing trains to occasionally run without if there are staff shortages – a common occurence due to what the RMT says is deliberate understaffing and reliance on overtime.

The two sides were unable to come to agreement this morning on the second day of 14 days of walkouts over three months.

RMT General Secretary Mick Cash said: “RMT entered talks with Charles Horton from Southern Rail this morning in good faith and with every intention of trying to reach an agreement.

“However, it became clear right from the outset that Mr Horton is refusing to stick by the assurances he gave to the media yesterday that he can “absolutely” guarantee a second member of staff on all current Southern services with a conductor.

“This dispute isn’t about who open and closes the doors, it is about that absolute guarantee of a second safety-competent member of staff on these Southern services.

“RMT is angry and frustrated that a golden opportunity to resolve this dispute has been wrecked because Mr Horton has reneged on commitments he has given through the media. Passengers will rightly share our anger. The programme of industrial action goes ahead with the union remaining committed to genuine and meaningful talks.”

However, the chief executive of Southern’s parent company GTR Charles Horton said: “In the space of a week, we’ve now met twice for face-to-face talks to try and reach agreement but, incredibly, they have absolutely nothing new to say – today, last week, last month – which helps us move forward. They raise everyone’s hopes by stating they want to end the dispute but then dash them by their continued head in the sand position.

“Now what the RMT is asking us to do if that second person is not available, is to guarantee we’ll cancel the train. That is simply not an option. Customers will come first, not the union, and we are not allowing them to maintain the power to control when a train is cancelled”, said Mr Horton.

“We are modernising our railway and want the driver operating the train with the guaranteed second member of on-board staff looking after customers, not doors. My number one priority is to introduce these changes to improve the customer service we give our passengers and, after months of horrendous travel misery, get them where they want to be on our trains, safely and on time.

“There is a full and fair offer on the table that most workers would love to have – a guaranteed job for five years, above-inflation pay increases for the next two years and guaranteed overtime. The union has advised its members to accept the new role and they can be assured this change is happening.”

Southern says it might run a train with no second person on board if there were widespread disruptions which meant an on-board supervisor was delayed and couldn’t get to a train on time – and that it would then arrange for someone to join the train halfway through the journey.