A criminal barrister is hoping that a public appeal will lead to the safe return of the wig he has worn in court for a decade. 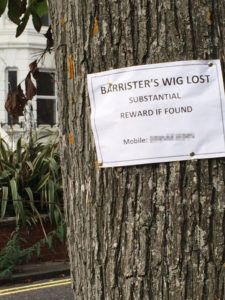 Matthew Heywood parked his car in Norton Road, Hove, earlier this month when it was broken into by a thief who grabbed his bag.

However when the thief realised there was nothing of interest in the bag, it was dumped and the contents strewn along the road – but the hairpiece was nowhere to be seen.

Now, Mr Heywood has put notices up along the street in an effort to be reunited with the wig, which would cost more than £500 to replace.

He said: “Somebody broke into my car and they took a bag with my wig, gown itc in it and they got halfway down the road and must have had al ook inside the bag and realised they weren’t interested, and just threw it on the floor.

“Eventually I got everything back except the wig. It was all strewn down the road, and I’m thinking that the thieves just left everything there but someone else has come along and thought that’s interesting so that’s why I put the signs around.

“To buy a new one costs about £560. I bought it new about 10 years ago. All the cases I have done I have worn it so it’s quite a lot of sentimental value. I just want it back if at all possible.

“Strangely, it was stolen from my car four years ago in Brighton and Hove and it found its way back to me.”

Since putting up the notices, Mr Heywood has received a number of crank calls. Anyone with information about the wig’s whereabouts can leave a comment or email brightonandhovenews@gmail.com.