Sensational Albion thrashed Norwich in one of the greatest performances of the Amex era. 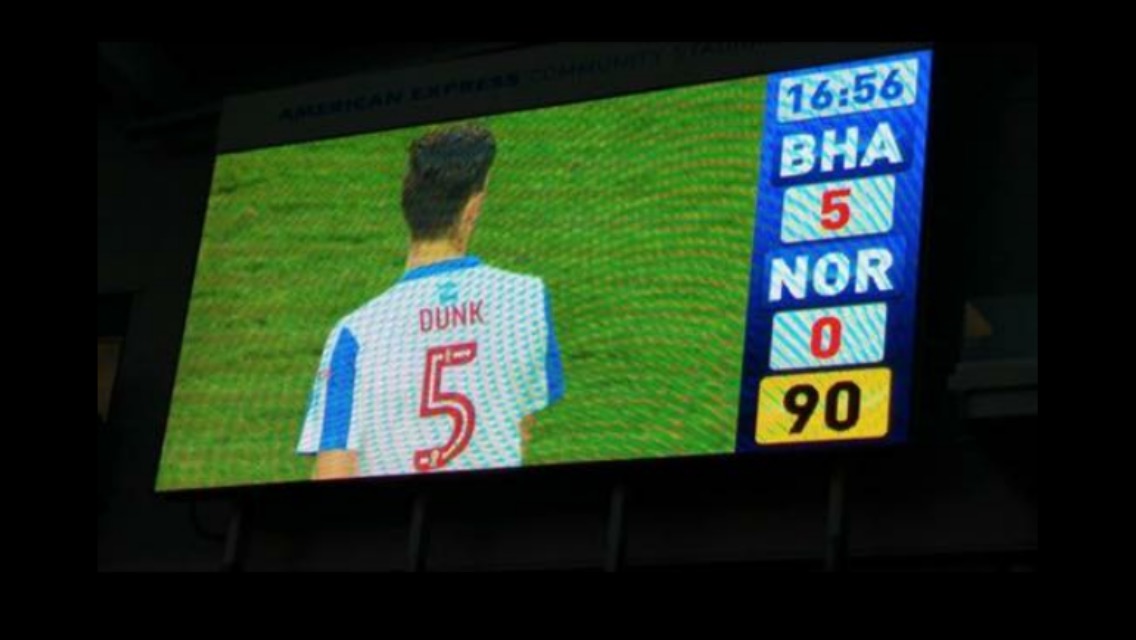 From the moment Glenn Murray shoulder barged Micheal McGovern out of the way and fired in the first of his hatrick, and give Albion a sixth minute lead . The Amex was electric.

Murray fired in off the post to put Albion in front.

To their credit Norwich atracked the Seagulls. Cameron Jerome causing problems and Wes Hoolahan claiming a penalty after the ball struck Bruno’s elbow.

But the main talking point of the first half, apart from Murray’s goal was the altercation between the goalscorer and Norwich full back, Martin Ollson.

Heads met and words were exchanged. But referee Madley only showed each a yellow card.

During the half a minutes applause for Albion fan Scott Mills who passed away recently, was impeccably observed by both sets of fans and substitutes.

Albion who have been temperamental at times, soon after the break , held firm. And as Murray intercepted as pass he laid  it off to Gaetan Bong  who strode forward and played an excellent ball to Jiri Skalak. The Czech international picked out Murray who had continued his run. And the forward planted a downward header home. To give Albion a two goal cushion.

Just as the clapping and cheering had died down Murray allowed a deflection off Ryan Bennett run out for a corner.

Skalak’s accuracy again was superb as he picked out Lewis Dunk at the far post.He  put Albion into an unassailable three  goal lead.

Norwich and Alex Neil looked visibly   shocked. And with Alex Pritchard, who chose Norwich over Albion in the summer, after originally agreeing a deal with the Seagulls, getting jeered everytime he touched the ball. The Amex was buzzing.

Another Norwich player with an Albion connection Brighton born Canaries captain Russell Martin, who runs soccer schools in Brighton and Hove. Was also having a stinker. And could do little, when McGovern needlessly played the ball to Bennett, who panicked and allowed Murray to steal in and fire home his first Amex hat-trick. For 4-0.

Steve Sidwell was revelling in the conditions. And not giving the Norwich midfield a moments peace.

David Stockdale virtually a spectator,had to be smart to  parry away a Jerome effort.

But it was Albion who were totally in control. As Skalak set Knockaert away and the Frenchman lifted the ball over the hapless McGovern, to make it an emphatic 5-0 to the Albion. The impressive Skalak’s third assist of the match.

The Albion move three points clear of Huddersfield and four clear of Norwich with a healthy goal difference of plus 14.

They visit Bristol City on Bonfire Night in the evening kick-off.