Spooky mist to cover Brighton for Hallowe’en trick or treating

Things will be going bump in not just the dark, but also the fog this Hallowe’en evening as people go trick or treating around Brighton and Hove. 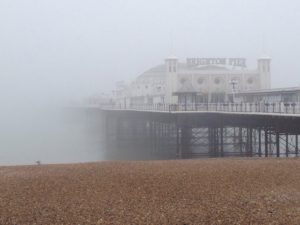 By Richard Rutter on Wikimedia Commons

However, drivers are being asked to be aware of real hazards on the road as a result of the heavy mist, which is not likely to clear until well into tomorrow morning.

The Met Office has issued another severe weather warning for the south of the country, which starts this evening at 7pm and continues until 10am tomorrow.

It says: “Fog will form on Monday evening, lasting until mid-morning in the south, but clearing during the early hours in the north of the area.

“Please be aware of the risk of disruption to transport.

“With largely clear skies and light winds patchy fog will soon begin to form on Monday evening and become widespread overnight into Tuesday morning with visibility down to 50-100m in places.

“The fog will progressively clear from the north early on Tuesday although some patches may persist well into the morning in the extreme south.”