Did you see crash which forced Land Rover off Old Shoreham Road and seriously injured three?

Police are appealing for witnesses to a collision on the A270 Old Shoreham Road, in Portslade, in which three people were seriously injured. 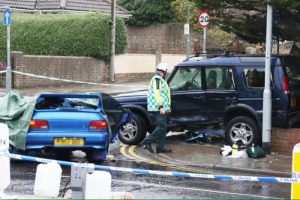 At 11.35am on Friday (4 November) a Subaru Impreza and a Land Rover Discovery collided in Old Shoreham Road at the junction with Benfield Way.

The Discovery was forced from the road by the collision and hit a 22-year-old local woman who had been walking along the pavement on the north side of Old Shoreham Road and was turning into Benfield Way.

The pedestrian, the 31-year-old Subaru driver, from Southwick, and his passenger a 29-year-old man, all suffered serious injuries and were all taken to the Royal Sussex County Hospital in Brighton for treatment.

The Subaru passenger has already been discharged from hospital and Sussex Police said that the condition of the other two casualties was not life threatening.

The driver of the Discovery, a 49-year-old Portslade man, escaped with minor bruising.

Both drivers were arrested on suspicion of drug driving. The Discovery driver was released on bail until Thursday 22 December while the other driver remains in hospital.

Sergeant Huw Watts said: “We are appealing for witnesses who may have seen the collision and the manner of driving of the two vehicles prior to the collision.

“We are also particularly keen to hear from the drivers of a yellow or gold coloured small hatchback, possibly a Peugeot or Citroen, and a white Transit-sized van.

“These vehicles were travelling west on Old Shoreham Road and would have seen the collision occur. They did not stop at the scene at the time.” 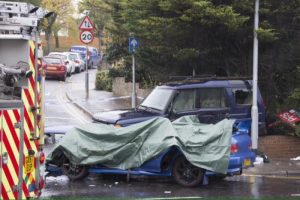 Any witnesses are asked to email collision.appeal@sussex.pnn.police.uk quoting Operation Thorneville.

You can also report online to https://sussex.police.uk/contact-us/response-to-appeal or call 101.