The housing and homelessness charity received 50 per cent of ticket sales receipts – £388 – and the proceeds of a collection on the door which raised a further £137.

The screening took place at the Duke of York’s and included Brighton actor Ray Brooks as Cathy’s husband Reg.

The money will support the work of BHT’s advice centre in Queen’s Road, Brighton.

Tim Brown, from Cinecity, hands over a cheque to Jo Berry and Bill Randall from BHT

Cathy Come Home was first screened by the BBC in November 1966. It shows Cathy and her family’s decline into homelessness after her husband has an accident at work.

The film ends with social services removing Cathy’s children at a railway station and Cathy, whose husband is no longer on the scene, left weeping uncontrollably as the credits role.

A cheque for £388.75 was presented to Jo Berry, BHT’s head of fundraising, marketing and PR, and BHT board member Bill Randall. It was handed over by Tim Brown, from Cinecity, the owner of the Duke of York’s and Duke’s at Komedia.

Mr Brown said: “We and the Duke of York’s were delighted to work in partnership with Brighton Housing Trust to support the work of their advice centre in Brighton.

“Each year the advice centre helps hundreds of household to avoid homelessness, so they do not find themselves in the same desperate situation as Cathy.

“There is a crisis of homelessness in the UK, not least in a Brighton and Hove, and anything any one of us can do to prevent even one person ending up on the streets is so important.” 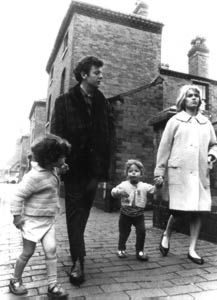 Mr Randall said: “Brighton is a special place with many wonderful businesses doing great work to support the many hundreds of charities working in our communities, be they the Brighton and Hove Table Tennis Club, Allsorts, or Brighton Housing Trust, just three of the organisations I work with.

“We at BHT are immensely grateful to Tim and all at Cinecity for the screening of Cathy with half the ticket sales going to our advice centre.

“The screening was a timely reminder of both how far we have come, yet how little has changed.

“Some things have got better, like the Homeless Persons Act, and social services rarely taking children into care because of homelessness. Rather they accommodate the family.

“But we have by no means begun to see the end of homelessness. In Brighton and Hove we have 24,000 people on the housing waiting list, 1,800 children living in temporary and emergency accommodation, and almost 150 rough sleepers.

“This situation is replicated throughout the country and it is a scandal that in this, one of the richest countries in the world, we cannot provide decent homes for all our citizens.”