The Rampion wind farm foundations have been completed off the coast of Brighton and Hove, with energy company Eon describing it as a milestone.

The company said: “Construction at Rampion has reached a significant milestone this week as installation of the 116 turbine foundations has been completed on schedule.

“Work to install the first foundations began in early February and was put on hold, as planned, during the black bream spawning season between mid-April and July.

“Since then two jack-up vessels – the MPI Discovery and Pacific Orca – have worked tirelessly to install the foundations using a 1,000-tonne crane to lift each foundation upright before lowering and piling it into the seabed with a hydraulic hammer.

“The yellow transition pieces have also been fitted on to the foundations and sit approximately 20 metres above sea level ready to hold the turbines. 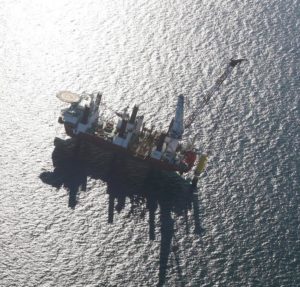 “Over the next few months the team will make the final preparations for the turbine installation, due to commence in spring and continue throughout 2017.

“Work will also continue to progress on the offshore cabling and substation, a vital infrastructure which will eventually bring the power generated by the turbines ashore.”

The £2 billion wind farm, which is about eight miles south of Brighton and Hove, is expected to generate enough electricity to power about 350,000 homes. 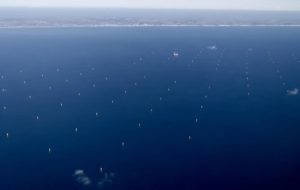 Eon’s development and stakeholder manager for the Rampion Offshore Wind Farm, Chris Tomlinson, said: “We’re pleased and proud to have reached this project milestone and we appreciate the patience of local residents while these major works have taken place.

“Despite the adverse weather at the start of the year, the good autumnal weather conditions have enabled us to finish this phase of work ahead of winter, which is testament to the commitment of the construction team.

“We now look forward to starting the turbine installations in the spring, which will see the wind farm really begin to take shape as the 116 turbines are gradually installed throughout next year.”

The wind farm is expected to create about 250 to 300 jobs overall during the construction phase with about 65 permanent jobs as it becomes operational in 2018.