Scaffolding surrounding the spires of St Peter’s Church, fondly dubbed Brighton’s cathedral, has been taken down as the first phase of restoring the tower is now complete. 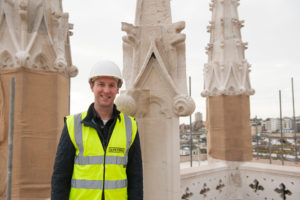 The £1.7m project to restore the church, one of the largest in Brighton, has seen the balustrade and pinnacles rebuilt by a team of stonemasons.

The next phase will start in July and involve cleaning and repairs to stonework of the mid-upper section of the tower, which is on the Heritage at Risk Register.

The work so far has been funded with a £250,000 grant from the Heritage Lottery Fund, alongside generous grants from English Heritage, the National Churches Trust, Garfield Weston, Allchurches Trust and Sussex Historic Churches Trust.

However, much more is needed to complete the restoration, and the church is continuing to apply for grants and fundraise.

Rev Archie Coates, Vicar of St Peter’s Brighton said: “Many local residents and passers-by will have noticed the scaffolding starting to come down on St Peter’s, revealing the beautiful craftsmanship that’s culminated from many hours of hard work.

“The restoration of this Brighton landmark externally is certainly something to be celebrated, but it’s also what’s on the inside that counts.

“I’ve been delighted to see hundreds of dedicated volunteers welcome so many new faces over recent weeks – from members of the street community at our weekly Safehaven events, to parents and carers at Thursday’s Tots & Toddlers group – there really is something for everyone.”

Oliver de Trafford, owner of Moksha Caffe on York Place opposite St Peter’s, reflected on the impact of the church on the local community: “St Peters has had a profoundly positive effect over the last seven years, embracing and supporting the local community, boosting business and investment and generally raising the profile of the area.

“I look forward to watching them grow and regenerate the church more over the coming years.” 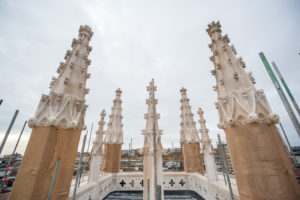 The church welcomed over 3400 people to services during December, including a children’s carol service with live farm animals and a candlelit prayer event to mark New Year’s Eve.

It also runs the nine-week Alpha Course, and the latest one starts on Wednesday 25 January

St Peter’s is a Grade II* listed building designed by Sir Charles Barry (later architect of the Houses of Parliament) and built between 1824 and 1828. Due to its magnificent size and visibility in the heart of Brighton, the church is unofficially known as ‘Brighton’s Cathedral’.

Decades of weathering, ageing and corrosive salt laden winds from the nearby seafront have caused damage to the building, and in particular the church tower.
In 2009 The Heritage Restoration Project was launched to carry out urgently needed repairs to the building. As part of the recent tower project, over 350 students from local schools have visited since July 2016, taking part in talks and demonstrations about the restoration.

To share details of the project and St Peter’s heritage, the team are continuing to develop workshops for local school students and hope to create a display outside the building later in the year.