A Brighton man is wanted for recall to prison, Sussex Police said this afternoon (Wednesday 15 February).

The force said: “Sussex Police wishes to trace 26-year-old Paul Coulter, from Brighton, who is wanted on a warrant for recall to prison. 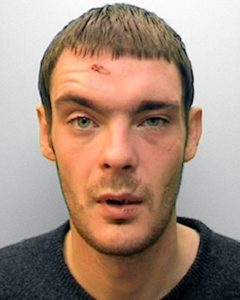 “Coulter was sentenced to eight months’ imprisonment when he appeared at Lewes Crown Court on (Monday) 25 July last year and was convicted of possessing an offensive weapon, namely a knife.

“He was released on licence from HMP Rochester on (Wednesday) 23 November but has since breached the terms of that licence.

“His last known address was North Road, Brighton, but he also has links to Crawley and Hove.

“He is described as having dark hair, blue eyes, a scarred face and tattoos on his right hand and arm.

“He can be violent.

“Anyone seeing Coulter or knowing of his whereabouts should not approach him but should call police on 999.

“Information can also be sent by email to 101@sussex.pnn.police.uk or by contacting the independent charity Crimestoppers anonymously on 0800 555111 (www.crimestoppers-uk.org) quoting serial 999 of 02/03.”