Two people have been treated for breathing difficulties after a spillage of suspected builders’ lime along Sackville Road, which has led to the surrounding area being closed. 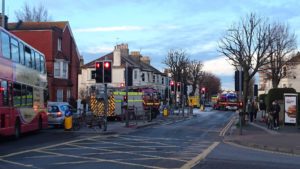 Emergency services are at the junction of Sackville Road and Portland Road where white powder is on the road, with firefighters wearing white masks as a precaution while the spillage is cleared.

Sackville Rd #Hove by Portland Rd is closed after building material dehydrated lime is cleared from the road. Avoid the area at this time.

A spokesman for Sussex Police said: “At 5.15pm on Tuesday (7 March) a quantity of white powder was reported to have been seen on the ground in Sackville Road, Hove, at the junction with Portland Road, extending over up to 100 metres.

“The immediate area has been cordoned off as a precaution while emergency services investigate the circumstances. A split bag of dehydrated lime used in building and construction work has been found at the scene and we are considering the possibility that this may be responsible for the spillage. Such powder can cause irritation to breathing.

“The fire service are in attendance to assess the best way for them to clear up the material.

“Two passers-by are being treated at the scene for breathing difficulties but their conditions are not assessed as serious.

“There is nothing to suggest any criminal or terrorist intent.”

One passer-by said: “There’s a load of white powder on the road apparently causing breathing difficulties to people. Its been closed as a precaution. I was told by the fire man who was diverting traffic. They all had face masks on, too.”

A spokeswoman for East Sussex Fire and Rescue said: “We can confirm we are attending an incident on Sackville Road, Brighton.

“We were called at 17.13 following reports of a white powder on the road. The area has been cordoned off. Police and ambulance services have been alerted. Two fire engines and officers are at the scene.”

Brighton and Hove Buses says it cannot serve any stops along Sackville Road or Portland Road.

⚠ Due to a spillage at the junction of Blatchington Road and Sackville Road, we cannot serve any stops along either of these roads. ⚠ pic.twitter.com/J1gr1706D5