A Brighton man has been spared prison after smashing a man’s face in with one punch at a troubled bar in Hove.

Gary Dawes, 30, a roofer, of Saunders Park Rise, Brighton, was sentenced to 20 months in prison suspended for two years after he admitted inflicting grievous bodily harm (GBH) with intent.

At Misty’s, in Church Road, Hove, Dawes punched another man, Paul Fill, so hard that he was knocked out.

The CCTV cameras also pictured two other men being hit in quick succession although, despite a public appeal by Sussex Police, they have never been traced.

Hannah Hurley, prosecuting, said that Mr Fill was taken to the Royal Sussex County Hospital, in Brighton, for treatment.

Miss Hurley said: “He now has a titanium plate in his face. The left side of his face is held in by some 15 screws.

“He still has some numbing to the side of his face, his nose, his lip. And he is in pain every time he eats.” 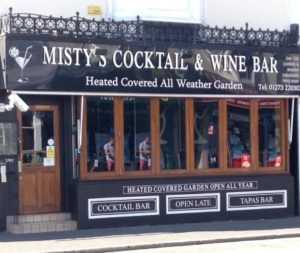 At Lewes Crown Court this afternoon (Monday 20 March) Judge Shani Barnes said: “The injuries to this man are extremely serious.”

The judge was handed a victim impact statement prepared by Mr Fill. He said that he had been recovering after a major stroke and brain haemorrhage three years ago and had gone out with an old friend.

Mr Fill said: “I now have life-changing injuries. The evening I went out was probably only the second time I had been out since the stroke.”

He said that he was “extremely angry about the assault against me” and that the attack had caused stress and inconvenience to him, his family and his employer.

In mitigation Philip Wakeham, for Dawes, said: “It was one punch … He was out on what was otherwise a convivial evening with other members of his family.

“Someone was giving unwanted attention to his niece who had just turned 18.

“It just seems to have affected him and on the spur of the moment he did what he did.”

It was not suggested to the court that Mr Fill had paid his niece unwanted attention – and Mr Dawes, a father of two, was described as “eight out of ten on the drunkenness scale”.

Mr Wakeham added: “The alcohol had played a part in it that evening.”

Judge Barnes said: “You may have thought that someone was paying unwanted attention to your niece. A simple back away would have done.

“You have, as a young man, accumulated a number of convictions for violence.”

The court was told that Dawes had 13 convictions for 28 offences including assault causing GBH, having a knife, robbery with violence, affray, criminal damage, dangerous driving and failing to stop after an accident.

He had been jailed more than once and spent time in a young offender institution. But his most recent conviction dated from 2014, Mr Wakeham said.

He said: “It’s more than nine years since he last committed a violent offence.”

Judge Barnes, the honorary recorder of Brighton and Hove, gave Dawes a suspended prison sentence and ordered him to carry out unpaid work one day a week for 40 hours.

She also ordered him to attend a “rehabilitation activity requirement” for 10 sessions and a “thinking skills course” for 19 sessions.

The attack by Dawes was one of two to have caused life-changing injuries at Misty’s in just eight months, a licensing panel was told last week. The Brighton and Hove City Council panel was asked to consider whether to close the bar and revoke its licence.

After Sussex Police and the bar owner Afshin Kianifard reached an agreement, the bar closed last Friday until the end of the month. During the closure, staff will undergo training, new professional door staff will be hired and a new designated premises supervisor will take over.

The licensing panel was told that Dawes was on the Brighton and Hove Business Crime Reduction Partnership banned list and should not have been admitted to the bar in the first place.