Two violent men have had their jail terms increased to seven years after the Court of Appeal agreed that their violent attack on a couple on Brighton seafront was motivated by hate. 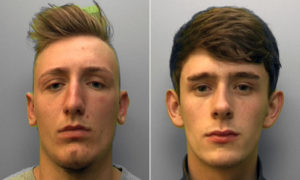 Gage Vye-Parminter, 18 and Matthew Howes, 19 started shouting homophobic comments at two men on May 2 2016. They then attacked the couple, knocking them to the ground and kicking them both repeatedly.

The beating was so severe one victim lost consciousness and both had to be treated at hospital for face and head injuries.

Vye-Parminter and Howes were originally sentenced to five years and four months detention to be served in a young offender institution. The court found that the attacks were motivated by hate and agreed that an uplift to the sentence to reflect it was a hate crime should have been imposed.

Solicitor General Robert Buckland QC MP referred the original sentence to the Court of Appeal as unduly lenient and personally argued the case in court.

Speaking after the hearing, the Solicitor General said: “This vicious attack was totally unprovoked and has left the victims with long-term emotional and physical scars. It will take the victims a considerable amount of time to recover from this.

“I thought the sentence was unduly lenient as it failed to adequately take into account that this attack was motivated by hate.

“I hope the court’s decision to impose a longer prison sentence, to include the sentence uplift, sends a clear message to society that such offences will not be tolerated.”