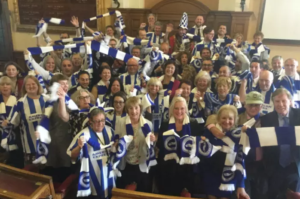 Less than a fortnight ago Councillor Morgan, the mayor Pete West and members of all parties were united in blue and white in the council chamber at Brighton Town Hall.

A number of councillors are season ticket holders but even those members less interested in football were keen to show their support for the Seagulls.

Councillor Morgan said after Albion secured promotion today (Saturday 17 April): “I’m elated and relieved. We are finally there. It’s been a long road since relegation from the top flight in ’83 and a hard one since the end of the Goldstone era 20 years ago.

“We wouldn’t be here now if it wasn’t for Dick Knight, Martin Perry, Tony Bloom and all the fans who fought to keep the Albion alive and into our new home at Falmer. Thank you.

“I will be proposing that Tony Bloom and Chris Hughton are awarded the freedom of the city in recognition of their achievement. 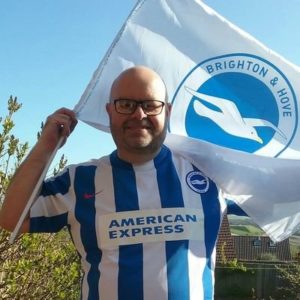 “Speaking as council leader, promotion to the Premier League could mean an economic boost for the city running into the hundreds of millions and puts Brighton and Hove on the sporting map globally.

“But as a lifelong fan, all that matters to me is that we are going up.

Albion chairman Tony Bloom described it as “truly amazing” as he celebrated after this afternoon’s match. He said: “We’ve waited a hell of a long time for this moment.”

Almost 30,000 fellow fans celebrated too after the final whistle at the American Express Community Stadium – the Amex – where Albion beat Wigan Athletic 2-1.

Promotion rivals Newcastle United slipped up, losing 3-1 at Ipswich Town, giving Albion the chance to go up as champions. To be sure, Brighton need two wins from their final three matches.

They’ve done it! Brighton and Hove Albion promoted to the Premier League