Brighton and Hove has gone Albion  crazy since last Monday. But it hasn’t always been like that. 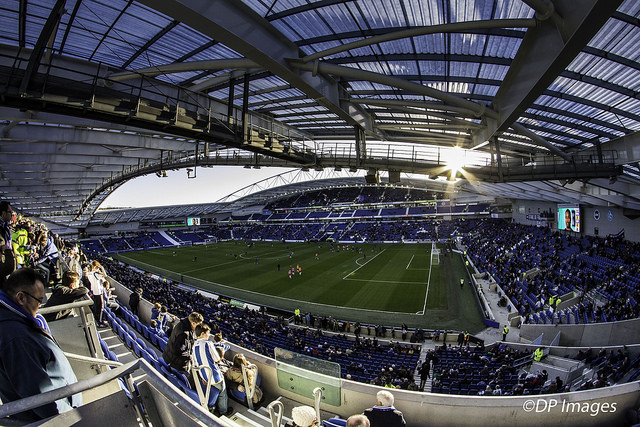 As recently as 1998 the then Seagulls chairman Dick Knight had to almost beg the council to lend support to the club. Nowadays of course the council leader Warren Morgan is a Brightonian and of course a huge Albion fan.

Sadly though in their hour of need the council and the twin towns really rather turned their back on Brighton and Hove Albion.

To fight the unbeatable foe

SWEAT (Save Withdean Environment Action Team) were a group of Withdean and Westdene residents who 17 years ago campaigned against the Seagulls moving home to Withdean from Gillingham, They argued that Albion’s fan to population ratio did not justify the upheaval the club’s tenanacy might create.

And then of course there were the Falmer residents whose tenacious campaign to stop the Falmer development for many years eventually ended in tears. They were ably assisted by Lewes Coucil leader Anne De Vecchi and the occasionally annoying nasal drone of of rock superstar, but then Lewes MP, Norman Baker.

Baker said lots of negative things about the stadium and offered little to substantiate his claims. He was representing the interests of his electorate he claimed. Most Lewesians couldn’t have cared less.

Falmer residents the Cuttress family, best known as the owners of Forfars, were appalled. The Albion were intending to flood their quiet, pretty little village, that the A27 and the Sussex University already dissected, with a community football stadium half a mile from their pond. On land owned and bequeathed to the club by the council.

Albion won, twice, but not without huge extra financial outlay and another generation of fans almost lost. Forfars was boycotted by many Albion fans, and not long after the stadium was opened, it went bust, leaving Greggs as the city’s main bakery chain.

To bear with unbearable sorrow

Almost exactly 20 years ago the Albion played their last ever game at the Goldstone. Days later, the bulldozers moved in. Fans young and old went along to the pay their last respects.

In the years that followed, with financial scandal and uncertainty over the club’s future home, Albion fans had little choice but to move on and continue providing support to the club. Those who did are just as much today’s hero’s as the players and staff who have achieved this promotion to the Premier League.

Dick Knight’s persistence and tenacity without doubt saved the Albion. Knight negotiated with Bill Archer for months in 1997, and he and his team, including Martin Perry, put their personal lives and in the case of Knight finances in jeopardy to bring Brighton and Hove Albion back from the brink extinction.

Even after the threat of demotion to non-league and football league expulsion had subsided, Knight had to finance a football club with no assets and playing 70 miles away from home with a fast dwindling fans base.

Between 1997-98 the small percentage of young fans wearing Albion tops in the twin towns would have been ridiculed by those dreadful plastic Arsenal, Chelsea and Manchester United fans we all had to endure.

Knight nursed the club through the Withdean years. The costs of just bringing the club back to Brighton and Hove, urged on by Adrian Newnhams excellent and almost evocative Bring Home The Albion campaign, were enormous. With a limit initially of just six thousand seats there was massive financial input by Knight and his board. Other supporters who are thought to have put their money where they mouth is include Dave Day, reinsurance genius Billy Brown and Norman Cook.

Frustratingly it wasn’t a case of getting more fans through the turnstiles, it was the fact that the limitations of Withdean meant the usual income streams were capped and ultimately exhausted. The only reason the Albion survived and were ultimately not just competitive and but very successful, was that Knight continually put his hand in his pocket. How do you make a small fortune from running a football club? Start with a large one.

We must all remember the contributions the late Paul Welch, Sarah Watts and Roy Chuter made to preserving this football club.

Paul Welch passed away earlier this month. The founder of Seagulls Over London, he also ensured some of the more rigid rules of the Withdean occupation were adhered to. By organising the regular litter collections. Withdean and Westdene really have never looked as tidy ever since.

But, one act eclipsed this. In 1996 the three Paul’s, Welch, Samrah and Bracchi, identified and challenged the now infamous removal of the non profit clause. There is little doubt that this interjection was crucial in Albion’s future history.

Roy Chuter was instrumental in the initial fight and campaigns against Archer and Stanley. He was a master of the English language. His infamous reply to Eversheds, the solicitors who represented David Bellotti was classic, and started: “I was concerned that someone had broken into your offices and stolen a quantity of your headed note paper, so appalling and basic were the grammatical errors in your latest correspondence.”

Sarah Watts was involved in the Albion supporters club for over 30 years. She was also instrumental in the Falmer For All campaign. A movement that gave the club the momentum needed to highlight the case for the stadium to be built.

To reach the unreachable star

Since 1983, the Albion have gone from the very top to almost the lowest imaginable.

In the mid to late 80s they flirted with regaining the paradise that is the top fight.

The 1991 Play-Off Final has almost became a catalyst for that period. From the final whistle the club went into unprecedented decline, both on and off the pitch.

By 1996, the Goldstone was already sold and Liam Brady, heralded as the great new hope, had resigned as manager. The club was relegated to the bottom tier for the first time in 31 years.

What happened next was unexpected and took football off the pitch and to the forefront of the fans’ personal lives.

By April 1997 Albion were as far away from the Premier League as they were from Mars. The Gillingham years between 1997-99 were a depressing time, mainly because for the first time in many generations there was no professional football in Brighton and Hove.

But Dick Knight was busy working wonders getting the club back home to Withdean. Things began to improve. The first trophy since 1965 when Micky Adams team won the 2001 League 2 title was followed by another championship in 2002.

A couple of seasons in the Championship showed at that level the club were punching well above their weight.

But the lack of a proper stadium was holding the club back – and a negative planning inspectors report regarding Falmer put the club on the back foot.

However, the reaction of the fans and the population of the area was the start of the green shoots on the road to top flight recovery.

Tony Bloom, who  will have recalled the club playing in the old Division 1 when he was a schoolboy, became chairman in 2009 and has had one intention ever since. Whether it be ‘one club one ambition’ or ‘togetherness’, Brightonian Bloom has been determined the Albion return to the top flight.

Albion are by no means the biggest spenders in the league. And spending £2m or £3m on a player does not guarantee Premier League football.

Promotion is a bit like a spacecraft re-entering the earth’s atmosphere. With an extremely narrow window, you get few opportunities to penetrate.

But Chris Hughton’s team have done it -and in some style. Hughton, as we put it to him last week, is both a humble and methodical man and expert tactician. His appointment one of the most important decisions in the club’s history.

Brighton and Hove Albion is once again a recognised name in world football. A wet Friday night losing at home to Rochdale is for now, as far away as Mars.

Next season the millionaire superstars of Manchester United, Manchester City and Chelsea and their legions of fans will be making their way to Brighton and Hove – a quite astonishing scenario.