The general election campaign in Brighton Kemptown has been ambushed by the Circus of Horrors.

Doktor Haze – real name John Hayes Mabley – has thrown his hat, well, one of them, into the ring that is the contest for a seat in the House of Commons. 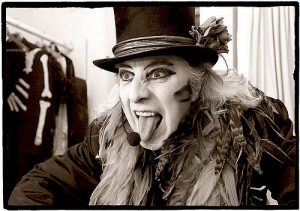 The 60-year-old is also preparing to bring his big top show to Preston Park on Saturday 28 May and Saturday 3 June.

On his Facebook page, Dok Haze said: “So it’s actually happening, if you are in the Brighton constancy of Brighton Kemptown you will have the chance to vote for Doktor Haze as your Parliamentary candidate.

“Standing in a marginal seat currently held by the Tories with Labour on their heels and the Lib Dems running up the rear it is a great opportunity of upsetting the apple cart one way or another.

“At the point of writing this I will be the only other candidate, standing as a alternative as opposed to an independent.

“Who knows what will happen but one things for sure a colourful 3 or 4 weeks lay ahead.

“I’d like to thank all the people who helped me with this, Simon Boing, James Tomlinson, Michell Reynalds and of course our old guitarist Drew Blood AKA Andy Ryan who played a blinder.

“Remember, aside from all this election malarky you can see the Circus of Horrors Alive and back in a Big Top in Brighton Festival in Preston Park.”