As a city we are making steady progress on dozens of projects that will benefit the city, those who live here, work here and visit it – and announcements on the next stages of several are imminent.

Work is well under way at the Shelter Hall/A259 project at the bottom of West Street and work on Circus Street has recommenced.

The marketing of King’s House has ended in the past week and we will proceed with a swift sale to one of the many prospective buyers who have placed bids.

In two weeks we will launch the crowdfunding campaign for the restoration of the Madeira Terraces, delayed because of the election, at the same time as we submit a bid for Lottery funding.

The planning application for the extensive Preston Barracks scheme will go in front of the Planning Committee this summer. If approved work is likely start by the new ear after decades of delay.

Valley Gardens comes back to committee in July and work is well under way on the new Hanningtons Lane off North Street.

Discussions with Crest Nicholson on the new King Alfred continue next week. Meanwhile the new swimming pool and zip wire in Madeira Drive are on their way as is the major work on Volk’s Railway’s new stations, track and stock ready for next summer.

Next month there will be progress on delivering the thousand truly affordable homes, on offer at 60 per cent of market rates, across the first three sites.

At least half of our 500 new council homes are now finished, nearing completion or in the planning stages.

The commencement of major works at the Royal Sussex County Hospital is well advanced as is work at Sussex University to provide more on-campus accommodation for students to ease pressure on city housing. 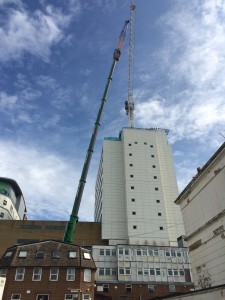 By the end of July there will be significant news on the Waterfront Project, including the extension of Churchill Square to the seafront and the building of a new 10,000-seat arena at Black Rock.

This is a half a billion pound project that will take a decade to complete but which will secure the city’s economic future.

Overall there is well over two and a half billion pounds of investment coming in to Brighton and Hove, aimed at delivering the jobs, homes and infrastructure the city needs.

With dozens of projects in the pipeline, limited council resources, a difficult national economic situation and opposition parties always ready to frustrate and delay progress, there are bound to be some hold-ups with a minority of schemes.

Overall though we are building a better Brighton and Hove with the needs of local residents and businesses in mind.