The Grenfell Tower fire has prompted councillors and tenants to ask vital questions about local blocks of flats as high-rise residents seek reassurances from Brighton and Hove City Council.

The council owns more than 40 tower blocks of which about 20 have some sort of cladding. There have been at least three notable fires in the past three years, with one death. 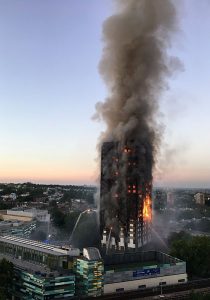 Questions are being asked about the nature of the cladding used locally because, in the fatal Grenfell Tower fire on Wednesday (14 June), it appeared to accelerate the spread of the blaze.

It is among the factors that prompted the Police and Fire Minister Nick Hurd to order checks to be carried out by local authorities around the country.

And the council has written to all tower block tenants after carrying out a review of its stock.

One tenant, Steve Parry, was dismissive, though, saying: “A letter has, in theory, been delivered to all residents of council-owned property today.

“I have yet to meet anyone who has received this letter where I live.

“For those who have not received it, please do not worry. It says nothing useful and appears to be purely an attempt to avoid responsibility for what will be seen as fraud, profiteering and ruthless plundering of public money.

“It is the beginning of a massive denial of responsibility.” 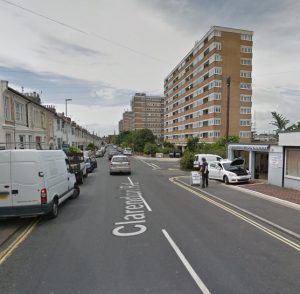 Cladding was proposed for flats in Clarendon Road, Hove, but the plans were turned down by councillors

Valerie Paynter, of the campaign group Save Hove, touched on proposals to clad tower blocks near Hove Station which were turned down by the council’s Planning Committee.

She asked: “Was the London cladding the same as was proposed in Hove? Just nail polish thin render over foam? It certainly looks the same in media drawings but with added decorative detailing on top.”

So far the council has published almost no information. It prompted one resident to point to remarks by a Kensington councillor who said that when she asked safety questions about Grenfell Tower before the fire, she was treated as a nuisance.

Councillor Mears, who speaks on housing for the Conservatives, also spoke about the case for sprinkler systems, saying that money was available.

Sprinklers have been fitted at one block, Somerset Point, in Somerset Street, Brighton, and will be in the Brooke Mead extra care flats when they open this year.

Two other council blocks in Kemp Town are to have sprinklers fitted, St James’ House and Essex Place, where community activist Chris Cooke died in a fire last year.

Councillor Phélim Mac Cafferty, the Green group convenor, said last night (Friday 16 June): “We are asking questions about inspections, regulation of our own stock, audits and all of the measures taken by the city council and the fire and rescue service to avoid such horror – the so-called ‘red tape’ that the Conservative government has been adamant about cutting.

“Only this afternoon the government launched an urgent audit to find out details of the tower blocks councils and housing associations own because clearly they don’t even have this basic information.

“We back the call from the Chief Fire Officers’ Association for fire sprinklers to be fitted in all new-build homes, in all tower blocks and all care homes.”

Councillor David Gibson, who speaks on housing for the Greens, said: “It is awful to think that this may have happened because lessons from previous tragedies have not been heeded.

“The city council now must reassure residents by rigorous fire safety checking, by making comprehensive details of the materials used to clad their blocks publicly available and by developing an urgent plan to rectify any deficiencies identified or deficiencies emerging in the light of learning from the Kensington tragedy.

“The government must ensure more rigorous fire safety standards and inspection as a matter of law at the earliest opportunity.

“Instead of forcing councils to use tenants’ rents to subsidise the housing association ‘right to buy’, they need to make available the necessary resources as a matter of urgency to ensure councils can make all their tower blocks fire safe.”

On Thursday (15 June) the new Labour MP for Brighton Kemptown, Lloyd Russell-Moyle, called for safety checks of every tower block to be carried out as quickly as possible.

The Grenfell Tower death toll appears to have risen to 58. The Metropolitan Police said that the total included 30 people who are known to have died and 28 believed to have been in the building but who have not been seen since.