A train driver has been shortlisted for a national award for his outstanding help to colleagues after a train from Brighton – on which he was a passenger – hit and killed a 19-year-old.

Mo Latif offered support to the train driver and fellow passengers after the incident on the Brighton to Bedford line which resulted in the death of Harry Davies, from Caterham, Surrey, in October 2016.

Mr Davies, 19, was believed to have been attempting to cross the train tracks between platforms at Horley when he was hit.

The accident took place around 10pm, with the train forced to remain at Horley until deemed safe to continue at around midnight.

In the time the train was waiting, its batteries expired and passengers were left in darkness.

The operators of the Brighton to Bedford line, Govia Thameslink Railway (GTR), said: “Mo walked up and down the train, continually offering support and reassurance to the passengers, making sure everyone was safe and understood what was happening.”

Once the train was declared safe to move, a GTR spokesperson said, “it was clear the driver was not in a fit state to continue.

“Rather than delay passengers still further while a relief driver was found, Mo took over the controls and moved the train to the next station where the passengers were able to alight.

“He then drove the train a further two hours to return the train to its depot in Bedford”.

Mr Latif worked a 15-hour shift, having caught the 10.05pm from Brighton to return home after a day’s work. 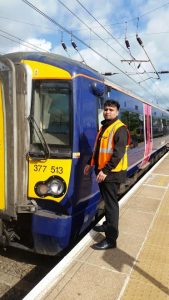 He was praised by his line manager Mike Bland: “This is way and above what would have been expected.”

Mr Latif is a driver on Thameslink trains, including those on the Brighton to Bedford route.

He is expected to hear whether he has won the award for Outstanding Personal Contribution at the National Rail Awards in September.