Brighton boy, 12, fights off man who grabbed him by throat

A 12-year-old boy was grabbed by the throat as he played in the street near his Brighton home. 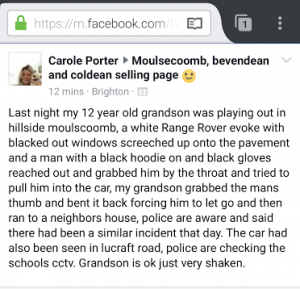 The boy escaped the grip of the man in Hillside, Moulsecoomb, on Friday evening (23 June), according to his grandmother Carole Porter.

She posted a warning on Facebook which said: “My 12-year-old grandson was playing out in Hillside, Moulsecoomb.

“A white Range Rover Evoque with blacked out windows screeched up on to the pavement and a man with a black hoodie on and black gloves reached out and grabbed him by the throat and tried to pull him into the car.

“My grandson grabbed the man’s thumb and bent it back, forcing him to let go, and then ran to a neighbour’s house.

“Police are aware and said there had been a similar incident that day.

“The car had also been seen in Lucraft Road. Police are checking the school’s (BACA’s) CCTV.

“We think either car was left-hand drive or there were two of them as he grabbed grandson from passenger side – also the Range Rover sign on front of car was Range in gold and Rover in silver. It’s white with black trim.

“(My) grandson just saw the man’s arm as (he) had a hoodie and glove on and said he was tanned.

“Take care of your kids out there. Sick people are in our area.”

Sussex Police said: “Police were called to Hillside, Moulsecoomb, after reports of a boy being grabbed by a stranger.

“The 12-year-old had been playing with friends when he reported a white Range Rover Evoque pulled up next to him and grabbed him. The boy managed to run away.

“Police attended and searched the area but couldn’t find a vehicle which matched the description.

“Police are appealing for anyone who saw what happened and can provide more details to get in touch quoting serial 1427 of 23/6.”