Hundreds of animal lovers have signed a petition urging councillors to crack down on noisy year-round fireworks in Brighton and Hove.

The petition was presented by rescue dog owner Liz Cook, from Hanover, at a Brighton and Hove City Council meeting.

More than 660 people signed the petition asking the council to “assess the impact of fireworks on the people and the domestic and wild animals in the community and environment of Brighton and Hove”.

It also asked what alternatives might be available – whether, for example, there was a way to reduce noise but keep the spectacle, perhaps by selling silent fireworks.

She also urged the council to “review the sale of fireworks to the public for private use with particular reference to the allowable sound volume”.

Today (Monday 3 July) she presented the petition to the council’s Neighbourhoods, Inclusion, Communities and Equalities Committee at Hove Town Hall.

Councillor Emma Daniel, who chairs the committee, told her that the council shared people’s concerns about the effects of fireworks on pets and urged people to follow the RSPCA’s advice.

She also mentioned the fireworks regulations which ban late-night fireworks – after 11pm – except on Guy Fawkes Night, New Year’s Eve, the Chinese new year and Diwali.

Councillor Garry Peltzer Dunn wondered how the council would be able to assess the impact of fireworks on people across the area. 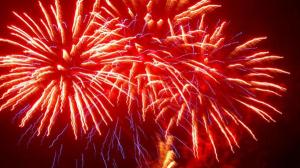 He said: “Is there anything we can do legally? Because we are, I fear, fairly toothless because we’re dealing with thoughtless selfish people letting off fireworks at 1 o’clock in the morning … that’s a blight on society.”

Councillor Tom Bewick said: “The random nature sometimes of fireworks sometimes in private gardens is in my view anti-social behaviour.

“I’ve long had the view that only organised fireworks should be allowed in this country.”

He said that there was a failure of legislation and added that this was one of those areas where primary legislation was needed, including better licensing of the sale of fireworks and displays.

He also said that he would like to see better enforcement and legal remedies.

“We have two dogs,” he said, “and it doesn’t matter what you do. It doesn’t help them one jot.

“The fifth of November is ok (but) you need proper control and better legislation.”

Chief Superintendent Lisa Bell, the police commander for Brighton and Hove, said that the 11pm curfew coincided with one of the busiest times in terms of policing.

She spoke about being realistic and said that he police had to prioritise which calls to answer and added: “I wouldn’t want to get people’s hopes up.”

There was a case for doing more to manage the availability of fireworks, she said.

Councillor Daniel said: “Even with new legislation it would still be very difficult.”